Here are my picks for you for the week, bound together by certain themes, mixed moods, growing claustrophobia and the weird, wild world of human nature.  Let’s start with the Fargos.

I understand that Bong’s Memories of Murder is stunning. If you find it, please tell me where.

Are you ready to party with Lady Gaga?  She and Global Citizen raised $35M for WHO in seven days to provide protective gear for health workers, improve lab capacities and further research and development into potential drugs and vaccines.  And on Saturday night, she’ll say thanks by hosting ‘One World: Together at Home’.  Quite the lineup of stay-at-homers -Jennifer Lopez, Taylor Swift, Celine Dion and Sam Smith also featuring Paul McCartney, Stevie Wonder and Billie Eilish.

Writer/ producer Kenya Barris’ significant skills made Black-ish and Grown-ish extraordinarily successful. Only an occasional actor, he’s jumped in fully loaded to make and star in Netflix’ #blackAF. It’s not on mainstream cable because it’s just too salty, but I’m here to tell you to jump on in ASAP. It finds the Barris, as Barris, and his large family ensconced in their vast ultra-modern Beverly Hills home and speaking his truth to the exclusion of everyone else’.

Rashida Jones plays his equally forthcoming wife, a former attorney (who worked with RBG) their opinionated and rambunctious children; the eldest is embarrassed by her father’s tracksuits, gold chain and conspicuous consumption, everyone in the family is terrified of the middle girl, then there’s the sensitive boy and the “only likeable person” in the family, the toddler. Barris gets away with inflammatory lines I can’t repeat here because, they’re usually dead on.  He explores epigenetic coding, how changes in DNA are meant to protect us “like 400 years living next to a nightclub, you grow smaller earholes”!  Plenty of celeb appearances to make it even more outrageous fun.

Scarborough from Derren Litten, creator of the smash-hit Benidorm finds residents of the seaside town on England’s east coast grappling with the relatable details of everyday life like a couple reuniting after five years, the owner of the arcade’s battling the ice cream mogul, the customer who drops dead in the hair salon, leaving a purse crammed with cash, the local copper whose idiosyncrasies go beyond the pale, the wannabe mobster and more.  Its regional humour and innate warmth makes this pleasant comfort viewing. On BritBox

Honour on Topic is a female-centric Swedish suspense thriller featuring four daring female lawyers, renowned for their work with victims of sex crimes.  They take on the case of a young girl found raped and bloodied, with the help of a female investigative journalist who is soon found murdered.  The victim then commits a violent crime which compromises the case, even as a cohort of prominent men circle their wagons.  Edgy stuff that also addresses relationships between the four lawyer sisters. 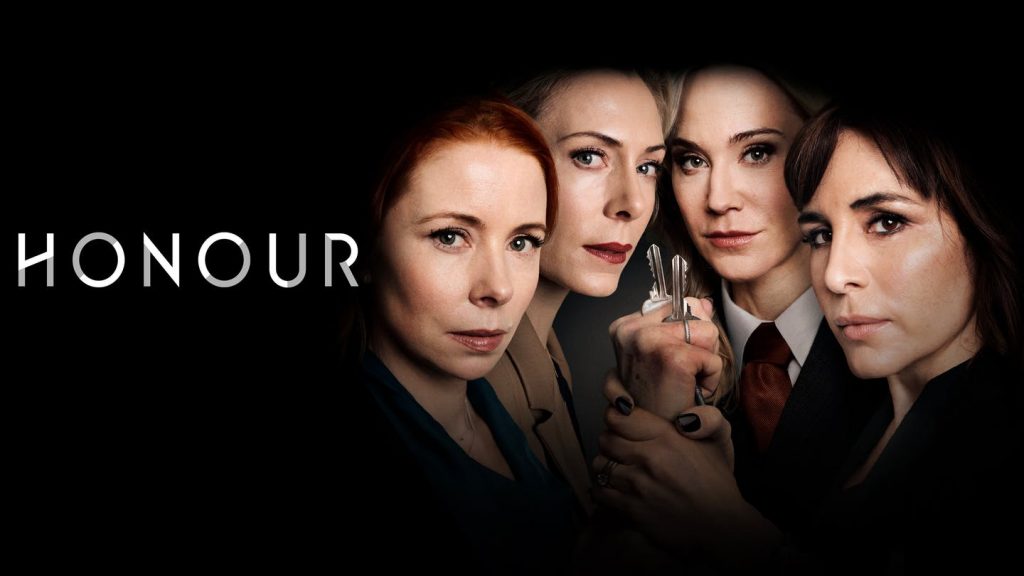 Hallmark movie magic for non-abrasive comfort viewing? Check! W Network delivers romantic, festive and family films every day until the end of April.  Weekday mornings there’s Christmas cheer at 10.  A Song for Christmas, Family for Christmas, and The Christmas List.  And from 2 – 8 pm Hallmark Channel’s signature romance movies like Matching Hearts and Over the Moon in Love, to classic favourites like Just the Way You Are and All Yours.  The complete sked’s at W Network is on national free preview until April 30. Please check local listings.

Did you miss the Rob Ford story Run This Town during its all too brief theatrical release? As of April 21st, its available on all on-demand and digital platforms, to rent or own and on DVD – June 2. The tawdry story of the late Rob Ford’s time as Mayor of Toronto and the drug scandal that did him in reveals new details. Damien Lewis is utterly transformed to play Ford, and Aladdin’s Mena Massoud plays his exec assistant who is secretly his proxy as Ford falls into addiction and immobility.  An aspiring journalist (Ben Platt) is given footage of Ford using drugs with known dealers, the problem is getting a news outlet to run the story. Ford’s City Hall staffers are aghast at his behavior; he’s off the rails, drunk, abusive and predatory.  … pure soap, if a tad gritty. Nina Dobrev, Jennifer Ehle and Scott Speedman co-star.  On a personal note, may I say kudos to Doug Ford for stepping up to battle the coronavirus.

Freebie alert! HBO Encourages viewers to #StayHomeBoxOffice with dozens of free series, documentaries and Warner Bros. movies on HBO NOW & HBO GO. Available to stream for the first time with no subscription required.