Michelle Obama personified inspiration, celebration and hope in the White House and continues that legacy out in the world. She is the only black American First Lady and she celebrates her roots in slavery, managing to find the lessons and history we need.  Her terms beside President Obama were marked by common sense, compassion, and unity that were deeply felt and a unifying force.  But there was a price. When they left Washington, she admits she sobbed for half an hour, relieved of the burden of international scrutiny she bore for eight years. She may be even more loved now, as a lecturer, women’s, children’s, civil and human rights champion, author, and filmmaker.

Her life since 2016 is documented in Netflix’ remarkably uplifting Becoming, produced by the Obamas’ Higher Ground studio. Director Nadia Hallgren followed her as she “unplugged” and found a woman who is unfailingly strong, loving and hopeful.  As a young student, Obama was told she was not Princeton material, but went anyway, and then on to Harvard where she mentored Barack Obama, then became a lawyer; the rest is “herstory”.  She stopped speaking publicly for a time in Washington because of haters but reveals the experience gave her perspective, and she is not surprised that the US is still a country of racism and tribalism.  Still, she keeps up the fight with a valiant heart and the compassion and wisdom we’ve come to know.

Talk about isolating! Spaceship Earth is a story for the times.  Twenty-five years ago, seven scientists entered a massive Biosphere in Oracle, Arizona. They were sealed inside to record data on planet earth, learn how to ensure its future and test it as a sustainable model for human habitation in space. The planet was recreated inside the complex, intricate natural landscapes, ocean, and farm fields, living spaces, water and waste systems and laboratories. The idealistic crew set to work despite the odds, and this is their story. Matt Wolf’s doc uses archival footage and interviews with the “Biospherians”, to recreate what happened, the passions, dedication, betrayals, intrusions, and natural threats. Prepare for a MAJOR twist!  On-Demand and Digital now.

The phenomenally talented Martin Freeman excels at comedy, drama, sci-fi and fantasy equally well; he is believable and real and you can’t look away when he’s onscreen. Freeman takes a dark path in BritBox’North American première of the fact-based limited series A Confession, launching May 12. He is Detective Superintendent Steve Fulcher, leading the investigation into the disappearance of 22-year-old Sian O’Callaghan.  Intensive police work leads to a local cab driver (Joe Absolom, the sweet guy from Doc Martin) who plays a cruel game of psychological cat-and-mouse. His diabolical evil and lies point to his guilt; he makes a strange confession, leads them to another body, then retracts it all.  Fulcher’s fortitude is further tested when he’s investigated for “coercing” the confession, leading to a life and death legal conundrum. Absolom’s character will make your skin crawl. Siobhan Finneran and Imelda Staunton are brilliant as grieving parents.  Directed by Paul Andrew Williams.  A Confession is not to be missed.

Also on BritBox the Welsh crime series 35 Days: 35 Hours. Here’s how it opens – someone’s having sex, someone’s dead, someone’s terrified and someone’s on fire.  Cut to a jury sequestered to decide the fate of a young man accused of the gruesome murder of a middle-aged woman who may have been his lover. There are few details to begin with, so we follow the juror’s arguments cold. They’re deeply divided on the man’s guilt, some base their opinion on evidence, some on personal taste and others to speed the process to get out. The atmosphere heats up fast (those Welsh insults!) as factions emerge. That afternoon they’re sent to a hotel because of a credible threat against their lives. Police believe someone is seeking to harm jury members, and indeed within a few hours, one is dead. 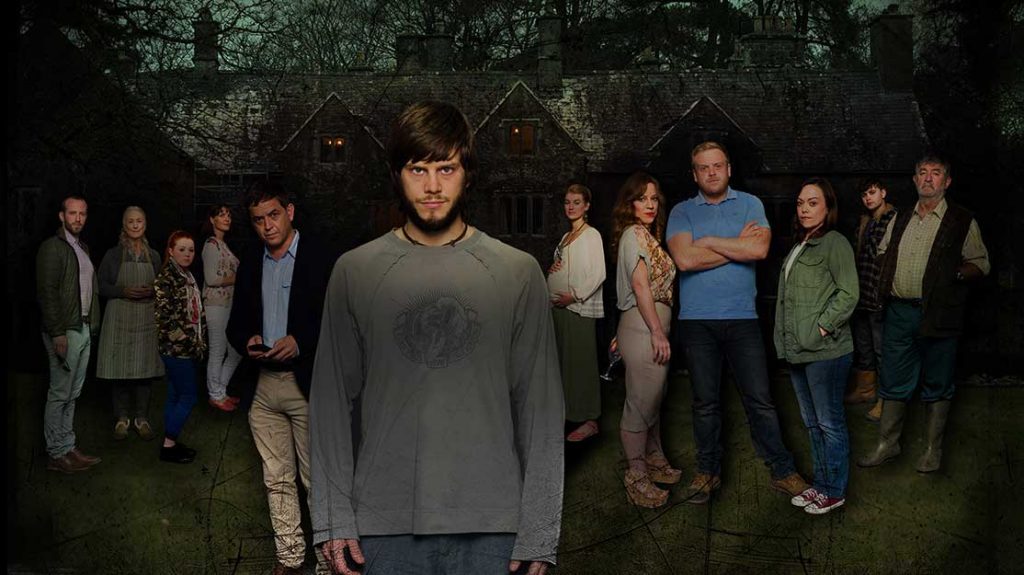 Lena Headey plays a super-efficient, laser-focused British immigration officer in Anthony Woodley’s The Flood, coolly evaluates refugees seeking asylum in the UK. Most don’t make it as far as an interview, and most interviewed are sent home to uncertain fates. There are approximately 70M refugees seeking safety and homes in the world now.  One day, she’s investigating a soft-spoken, educated man from Eritrea (Ivanno Jeremiah) who journeyed 90o0 km alone to get there. He’s endured terrible suffering; he’s forgotten his own name and lost his passport “in the sea”. He finds a refugee camp in France and plots with a Pakistani couple to hide in a lorry headed for the UK, a soul-killing journey.  He reveals the horrors to the officer and begs to be allowed in.  This harrowing drama represents the hard realities of life for many outside our comfortable world and the lack of compassion of certain countries for refugees.  Director Anthony Woodley takes a no-nonsense approach to tough issues and trusts Headey and Jeremiah to play it lowkey and authentic; the result is uncomfortable and timely.  On-Demand and Digital now.

English war correspondent Robert Fisk has covered the globe’s hottest wars for over forty years. Earning his stripes as a cub reporter covering the IRA in Belfast, he moved on to the Middle East, the hottest war zone in the world, and stayed. His story’s told in This is Not a Movie directed by Yung Chang, is a portrait of a veteran who forges ahead with dedication and purpose, to let his millions of readers know what’s happening, just the fact ma’am, no agenda.  He guides us through bombed-out towns alive with gunfire but barely raises an eyebrow.  He could be considered hardened, but he isn’t, he’s an idealist and truth-teller and he can’t not do it.  He draws attention to blasted hellholes where people have lived in war for generations.  Fisk has no use for modern online, remote reportage, saying “You must go there and sniff it and see it for yourself”.  On-Demand and Digital now.

Hulu’s Into the Dark takes a holiday each month and uses it as a springboard to a mini horror film. For May’s Mother’s Day episode, a pregnant woman meets a peppy pediatric nurse in a café, who invites the expectant mum and her husband to her ranch for dinner.  They drive to the lonesome place far from the nearest neighbours, and it quickly becomes clear she is up to no good, prepared to do what it takes to have the baby for herself.  It’s a Blumhouse Production (low-budget horror films Paranormal Activity, The Purge, Get Out, Insidious, Split, Happy Death Day, Upgrade, Sinister, Halloween, The Invisible Man, and The Gift) so yes its exploitation suspense – a bit fast and loose but ok.

Shane Belcourt’s sweet and at times bittersweet story of two Torontonians (Kristian Brunn and Cara Gee) striving for happiness is about a future time when people may live on Mars.  Red Rover finds them meeting, falling in like but unable to move forward. He’s living in his ex-wife and her new man’s basement, she’s sure he wants his ex back. They’ve miscommunicated; they’re both protecting themselves from further disappointments. IN desperation, he applies to leave Earth permanently and settle on Mars. Then he wins a place. So how does this solve his problems?  A winning look at losing. Available digitally and On Demand May 12th.

Haley Bennet stars and exec produces Swallow. She’s a girl who grew up in poverty and marries a wealthy, elitist creep who keeps her squarely under his thumb.  She keeps a perfect house, dresses and grooms herself perfectly and does everything right. She is afraid of him.  Soon she begins to swallow small items, a hardware nut, then a nail, then a screwdriver.  Then he finds out.  Deceptively simple and brutally, emotionally painful. Directed by Carlo Mirabella-Davis.  On-Demand and Digital now.

Netflix criminal justice docuseries Trial by Media kicks off with the infamous Jenny Jones case, the Canadian talk show host who outed a guy’s gay crush on straight man who then murdered the gay man a few weeks later. The prosecution lawyer accused Jonathan Schmitz of murdering the man because he was embarrassed. The media went wild, Jones lost it all and the public taste for trash talk shows diminished. The series covers six cases in which the media worsened already bad situations, including the Subway Vigilante, Rod Blagojevich’s political fall and Amadou Diallo, the unarmed African immigrant who was shot 41 times by police in New York City.  George Clooney and Grant Heslov executive produce.