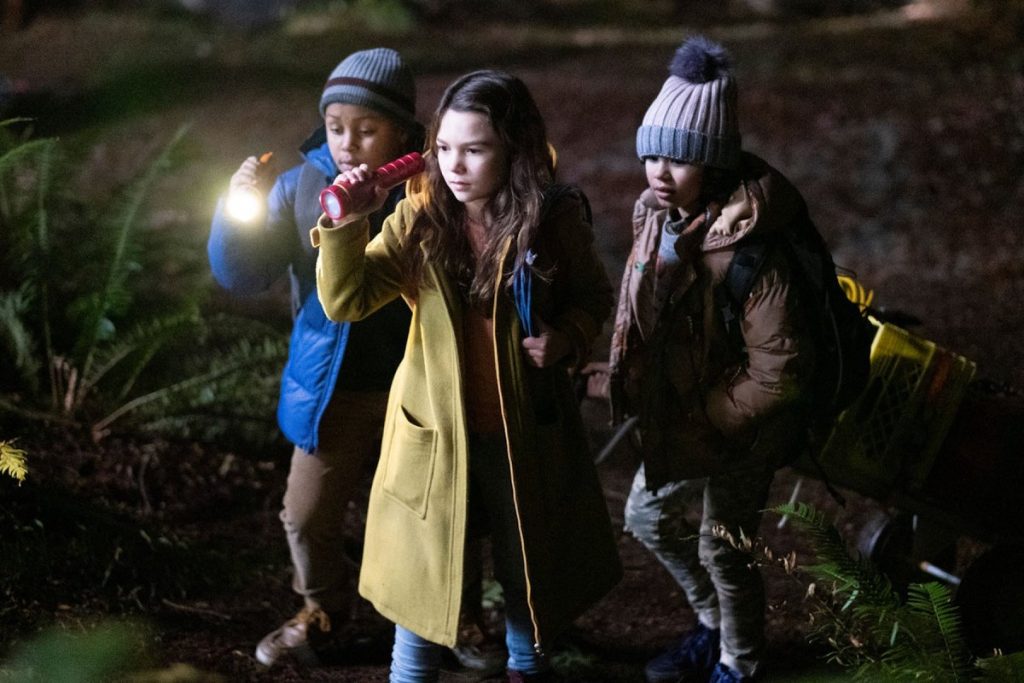 Brooklynn Prince who won our hearts in the Oscar-nominated The Florida Project, is a multi-award-winning actor and director and she’s all of nine years old!  Prince stars in Home Before Dark on Apple TV in a most unusual role.  Her character Hilde’s father took her along to crime scenes when he worked the beat in New York City, but lost his job and relocated the family to a deceptively quiet rural village where Hilde’s able to hone her burgeoning reporter skills.  She jumps right in when a beloved neighbor is murdered, and armed with experience and finely tuned instincts, goes where and when she needs to go, despite her father’s repeated warnings to be home before dark. Hilde is a force of nature, a role model for girls and women, she’s confident, whip-smart and unstoppable, a Nancy Drew for modern times. I spoke with her from her home in Los Angeles.

Brooklynn, has Hilde taught you anything?

I learned that when new when people tell you not to do something, go ahead and do it. But she gave me a passion and drive to do it, she stood up and made those comments (standing on the table in the school lunchroom).  Its one of my favourite scenes and I found a new respect for journalism there’s opinion and fact and both are hard, putting your opinion out there is tough. People might like it nor not like it. But journalism digs down to get the facts, and sometimes people don’t like facts. They some happy stuff.  Today Hilde would be doing stories about the coronavirus!!

I’m so impressed that she naturally understands human nature and she knows when she’s being lied to.

Yes, that’s whoa! I wish I knew when people were lying to me, it’s like a superpower that she has. She can read people, its awesome. Her father didn’t teach her, its instinct she has knowing when people are lying to her.  She goes further than her parents want to her go – because she has curiosity, like Wow! I’m going here and my parents won’t let me.

Hilde’s fearless; she jumps into situations, confident that she’ll succeed.

I think her parents want her to have freedom and at one point she gets in trouble, but Hilde still goes out. For me, I wish my parents would let me, but I might be scared.

It’s also pretty impressive that she knows All the President’s Men, the film about journalists braving danger to solve a conspiracy.

I hope to see it, my parents haven’t shown it to me yet, but I really do want to.  Maybe not 36 times. My parents are saying they’ll show it to me.  Matt taught Hilde a lot about that when he was reporting. She was observing and listening and taking notes while she was following him when he went out on stories.  She’s a really good observer; people don’t notice find certain things and she will see them.

Nancy Drew has been a role model for girls since 1930.   Do you feel Hilde has the same positive influence?

Yes, definitely I do think so, she’s like Hilde who is really curious, and she stands up to people and speaks up for people who don’t have a voice.  And Hilde’s relatable and also, she’s a real person, she’s like kids, not a cartoon fictional character. You want to be like them, this is a real persona and she’s in the real world, and this is actually possible what this person is doing.  I can do this!

How are you handling social isolation?

I try to play with my brother, but he gets really annoying, I facetime my friends, my parents are cooking, taking me outside in our back yard to play soccer and baseball and hide and seek.    We’ve been watching movie classics Some Like It Hot, Gentlemen Prefer Blondes, fun movies I haven’t had time to see.  I just saw Ford V Ferrari and I love it!  I’m like a car girl, when I grow u I want a robotic one. That’d be super cool.  Watching the film, you’re always anticipating, my dad is annoyed sitting next to me because I’m yelling Go! Go! Go!  No, don’t do that! Keep going fast!

Any words of wisdom Brooklynn?

Go ahead and do it, work hard, you have to work harder than you’ve ever worked before to do what you’re going to go, like Hilde and me. We’ve worked hard and we’re not scared to go out and do things!

« Cate Blanchett Plays Phyllis Schlafly, the Mother of Six Who Changed the US in Mrs. America,
How Does an Australian Play American Women’s Liberation Heroine Gloria Steinem? Rose Byrne Nails It on FX on Hulu’s Mrs. America. »