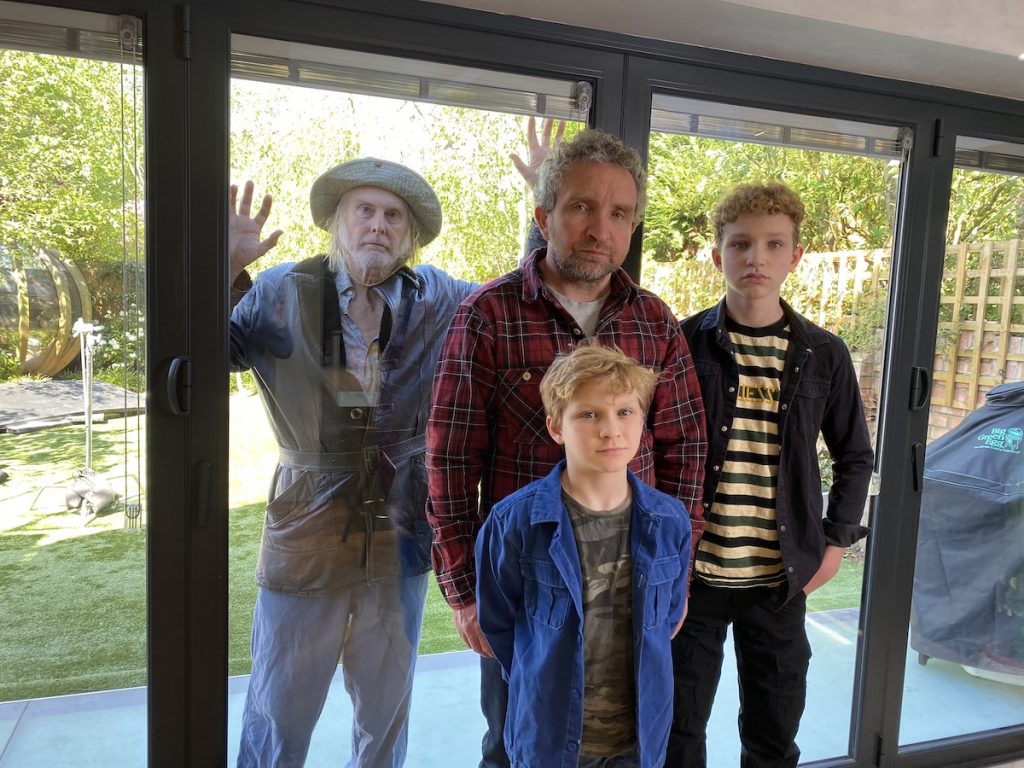 We’ve been raving about Dads Bryce Dallas Howard’s first documentary, for a couple of weeks now and its finally available Apple TV+. Howard gathered her famous dad Ron, grandfather actor Rance, comedians Will Smith, Hasan Minjah, Kenan Thompson, Patton Oswald, Ken Jeong, the two Jimmys, Judd Apatow and regular dads for their input. To say this is an incredibly moving doc is a vast understatement.  What is a father? According to guests, he is a hero, a master gardener, a friend. Fatherhood is “fluid, no rules, multiplicities, magical, intimidating”.  What are his standards? Love, safety and example. They ask themselves if they are good dads, and Bryce’ youngest brother becomes a father for the first time. Still recovering from this profoundly emotional and uplifting experience.

Isolation Stories is a remarkable achievement, a filmed anthology of people in lockdown together, from directors Paul Whittington, Paul Andrew Williams,  Louise Hooper and David Blair and actors Sheridan Smith, Robert Glenister, Tom Glenister, Darren Boyd, Angela Griffin, David Threlfall, Eddie Marsan and their families.  Shot within the boundaries of physical distancing during the Covid-19 lockdown, they have the zeitgeist of this historic social pause and relatable problems – endless, artificial Zoom meetings, being pregnant and alone, caring for sick family members, keeping birthdays, catastrophizing, marital divides we feel keenly because they affect us all to some degree. The authenticity is shocking, almost too intimate at times! It’s such an unusual and rewarding experience. On BritBox June 23rd

A second documentary on the notorious lawyer and villain Roy Cohn this year would never have seen the light of day had not his protegee Donald Trump “won” the White House but here it is. Director Ivy Meeropol’s Bully. Coward. Victim. The Story Of Roy Cohn features all-new archival footage and interviews revealing him as the man who pushed for the execution of Meeropol’s grandparents, Julius and Ethel Rosenberg. Cohn was fond of saying “make the law or be the law” and bent it to his needs, and was considered a self-loathing Jew, and self-loathing homosexual who bullied and legislated against gays. Don is just the latest iteration of the Republican party as shaped by Cohn, whose first credo is “Never admit you’re wrong”.  The pattern is to mislead, insult and bully victims with scare tactics, refuse to pay your way, distract and disavow. Cohn knew what he was doing, he didn’t own anything, so he couldn’t be sued. He never had a relationship except with paid escorts and phony engagement to Barbara Walters. He knowingly gave his escorts AIDS. Folks, this is the tip of the iceberg. See how the Republican party became what it is today and the terrifying person who laid its foundation.  On HBO now.

Another famous person is revealed to be nightmarishly difficult in Peter Medak’s unblinking doc The Ghost of Peter Sellers.  After a series of hit films, Medak was hired to direct comedy superstars Sellers and Spike Milligan in the pirate comedy Ghost in the Noonday Sun which you never saw because it wasn’t released. According to Medak, Sellers was so temperamental, “unbearable” and mean that he poisoned the entire shoot, leaving Medak and cast and crew traumatized. He says it’s been a dark spot on his life for 43 years. In 1972 Sellers was considered the greatest comic actor alive but arrived on the set depressed by his split with Liza Minnelli and things immediately went off the rails. Sellers randomly fired people, had no plan but insisted on running the show;  the extras weren’t fed, they had no experience shooting on water, they sunk the ship, and Sellers, who’d had eight heart attacks, faked another onset in order to go home. He would switch off in the middle of a take and disappear. Looking back, Medak realises Sellers had undiagnosed mental health issues, but took the blame for the film’s failure and still is haunted by the ghost of Peter Sellers. This doc is uncomfortable and challenging but asks the ages-old question – do destructive people get passes simply because they’re celebrities?  I guess we know the answer.

Also on HBO, June 21st is a grim, noirish reimagining of the fifties TV series Perry Mason, based on the novels by lawyer and author Erle Stanley Gardner. The series is Mason’s origins story, how a battle-scarred, PSTD’d WWI veteran became a detective and later a celebrated criminal lawyer who always won the case. It’s 1931 Los Angeles, thriving despite the Great Depression and Mason (Matthew Rhys) is a poverty row dick, mourning a failed marriage and low prospects. He’s accompanied by his longtime friend and assistant Della Street (Juliet Rylance), a policeman turned investigator Paul Drake (Chris Chalk), Mason’s employer (John Lithgow) and our own Tatiana Maslany as the charismatic evangelical radio star Sister Alice McKeegan of the Radiant Assembly of God. A delightful stew of vintage vibe and dogged, tough guy determination as Mason, tries moving home to the farm he abandoned and blackmailing studios with photos of their top stars, both efforts total failures. Then Lithgow’s character hands him the case of a lifetime, investigating the kidnapping, murder and mutilation of an infant. Gruesome, yes, and that’s the motif in 2020, a far cry from 1957’s scrubbed up TV Mason and his stylish, bright, mid-century office.

Another hero dashed in Matt Riddlehoover’s heartbreaking documentary My Darling Vivian. Johnny Cash’s passionate love affair with Italian American teenager Vivan Liberto, their loving marriage and four daughters seemed a real success story – until Cash got famous. He was often touring, leaving Vivian to fend for the children in their isolated mountaintop home beset by snakes, bobcats and fans who showed up at all hours. She was the victim of racist hatred stemming from an ill-lit newspaper photo, but he was rarely there for her. He disappeared for months at a time and lived with Bob Dylan in New York without letting the family know for a year. He developed a serious drug addiction and took up with country singer June Carter. They eventually married and the two of them set out to erase Vivian from the history books. She was shunned by the country music world and nearly destroyed by depression and anxiety. When Cash died, a song performed in Vivian’s honour at the Ryman Center memorial was deleted from the televised show. Carter Cash spoke of Vivian’s four daughters as her own and demeaned her in the press. If there was ever an aggrieved wife, Vivan Liberto was the one. Kind of makes you look a the “mythic love” between Johnny and June differently, considering the price Vivian paid. Hear from daughters Rosanne Cash, Kathy Cash Tittle, Cindy Cash, and Tara Cash Schwoebel who still bear the scars.

My Darling Vivian – First Look from The Film Collaborative on Vimeo.

Outstanding improvised work, including a 45-minute single take from Joseph Gordon-Levitt in the nerve-shredding, real-time drama 7500, set inside an airplane cockpit.  He’s Tobias, a 31-year-old American co-pilot flying a passenger plane from Berlin to Paris. Gökce, his flight-attendant girlfriend, the mother of his child is onboard, and all is well. In stunning suddenness, men with boxcutters rush the cockpit, immediately kill the captain and state their aim to crash the plane to avenge atrocities against Muslims Tobias’ professional calm is tested again and again as bodies outside the cockpit pile up, visible via CCTV, and he sustains serious, disabling wounds. The attackers crash the door continuously over the next hour as Tobias speaks with the leader of the gang, air traffic control, and in the background, we hear passengers screaming and fighting. Directed by Patrick Vollrath and co-starring Omid Memar, Murathan Muslu, and Aylin Tezel. On Amazon Prime Video.

We are so hooked on Hulu’s Taste the Nation with Padma Lakshmi. Another food show? Yawn. And then we watched, and then we cooked. Ten episodes executive produced and hosted by the food writer, take us to culinary corners of the States we might never know about otherwise. The Gullah Way concerns areas around Charleston, South Carolina, former slave trading markets where 200 thousand descendants of slaves thrive on their unique culture and cuisine. Red Rice is a staple, rice, pork tomatoes and spice and let me tell you it is delicious and easy! Syncopation was Gullah’s music which influenced hip hop, jazz, blues and soul music. Burritos at the Border looks at the great political divide at El Paso and Juárez, where food is considered resistance.  Border patrols, helicopters, drug cartels are reality as food is prepared – “tradition wrapped in colonisation”.  And there’s the all-American wiener culture of Milwaukee, Wisconsin where German immigrants congregate and eat schnitzel, bratwurst, sauerbraten and refuse to call them hot dogs. The city looks European, tastes German but is deeply Mid-Western.  Plus, seven more yummy episodes.

The CBC celebrates Indigenous film with the excellent coming-of-age film Kuessipan (“to you” in Innu) is a beautiful and heartbreaking story of childhood friends in remote Uashat May Mani-Utenam, Quebec. Myriam Verreault directs local first-timers/non-actors Sharon Fontaine-Ishpatao and Yami Gregoire who play Mikuan and Shaniss. They’re weathering the storms of impending adulthood, their dreams for the future and pondering leaving or staying. Their divergent dreams bring friction and deeper understanding in incredibly heartfelt ways. Bring your tissues. It’s based on Naomi Fontaine’s award-winning first novel and shot in three languages – French, Innu and Montagnais.