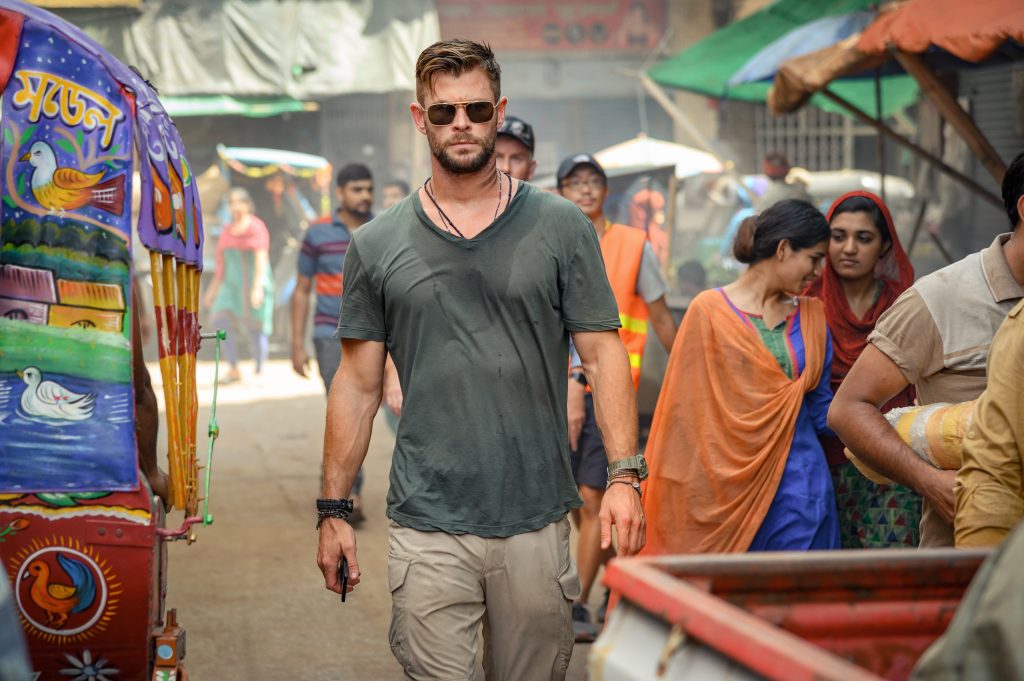 Outbreak – Dustin Hoffman and Renee Russo battle a deadly virus carried from Africa to America by a monkey.

Amerika – A television miniseries on the aftermath of a Soviet takeover of the US, starring Kris Kristofferson.

“The settler and pioneer have at bottom had justice on their side; this great continent could not have been kept as nothing but a game preserve for squalid savages” Settler Proverb opens Jeff Barnaby’s Blood Quantum, a zombie apocalypse horror film, that points to the end of life as we know it, for all but an isolated band of immune Mi’gMaq. The reserve is inundated with non-immunes seeking a place to hide, overwhelming the local police chief, and forcing a military response. It raises the idea of conflict, history, colonization, and natural disaster. Stars Michael Greyeyes, Elle-Máijá Tailfeathers, and Forrest Goodluck. Jeff Barnaby’s craftsmanship brings to life a moody, atmospheric, and important reminder that nature is indeed a psychopath. “The term “blood quantum” refers to a colonial blood measurement system that is used to determine an individual’s Indigenous status, criticized as a tool of control and erasure of Indigenous peoples.” Shot on the Kahnawake and Listuguj reserves in Quebec and Campbellton, New Brunswick.

Animal rights activist Ricky Gervais recently lost his elderly cat Ollie and Twitter jumped in to comfort him. One of the great figures in comedy in turn, has helped us get through the pandemic via his regular at-home broadcast in which he lets his wit and imagination run free as well as his disdain, e.g. Gal Gadot singing Imagine. Gervais’ series After Life, launches its second series today on Netflix, dealing with Tony’s continuing struggles following the death from cancer of his beloved wife. Beyond the pain, there are useless attempts to deal via yoga, a sharing circle at the dramatic society,  a mailman who takes liberties all of which infuriate him, so he lets loose on a woman who is almost completely surgically rebuilt and forms a close bond with a prossie whom he sets up with the mailman.  Grace notes arrive in the form of a fellow graveside mourner. Gervais’ blue language, huge heart, and scathing wit are balm for the soul; its healing television in a weird way. Gervais’ genius for honest reflection is a lesson to us all.

A Mumbai drug lord has the son of an imprisoned rival kidnapped and held for ransom and as a threat; the rival tells his muscle man to retrieve his son or he will have his family killed. It’s the darkest of the dark criminal underworld across India and Thailand, where if guns and knives don’t kill you the weather and traffic will. Who ya gonna call? Chris Hemsworth. Netflix’ Extraction stars “Thor” as Tyler, a seasoned black-market mercenary who reluctantly takes the on the extraction assignment. He lands in Bangladesh with a bang, to make the scoop setting off a wave of killings that would make Al Capone blush. His reputation, presence and ultra-violent confrontations with gangsters force the city to shut down, including bridges, an important point. Amazing photography, stunts and locations, an old-fashioned macho yarn, directed by Sam Hargrave, starring Rudhraksh Jaiswal, Randeep Hooda, Golshifteh Farahani, and David Harbour. As I said, ultra-violent.

Wondering what Lady Mary is up to? Well Michelle Dockery plays the American wife of Captain America himself, Chris Evans, in an excellent criminal justice series Defending Jacob on Apple TV Plus. The eight-episode series examines the aftermath of the arrest of a high schooler (Jaeden Martell), the son of a Massachusetts assistant district attorney, for the murder of a classmate. Intriguing clues emerge, a knife belonging to the boy and mysterious online messages, his friends may know something, or may have done something, and his parents must face the possibility that he is guilty. The express their unconditional love and defend him; he has displayed violent tendencies in the past and they wonder if he inherited his murderer grandfather’s nature. Or is a local suspected pedo to blame? Intriguing story, solid performances, and production values. Well worth the time.

Sundance Now’s gripping series Sanctuary tells a cautionary tale about estranged twin sisters reunited after Siri, currently receiving medical care in an Alpine facility begs Hel to visit. Hel goes, against her gut feeling and reluctantly agrees to pose as Siri so Siri can get out and visit her boyfriend. “Just one night!” She does not return, and Hel can’t prove she isn’t Siri. Hel’s locked down, drugged and tormented in the place that is, in fact a remote, mountaintop research lab examining psychopaths.Those who run the place have their own idiosyncrasies and dictatorial agendas, particularly Matthew Modine who plays the commandant and chief doctor. The drama’s intense in this nightmare scenario made more poignant set against the breathtaking beauty and isolation of the Italian Alps location. Swedish actor Josefin Asplund plays the “normal” sister and the psychopath, what fun! She tells us all here.

True History of The Kelly Gang stars George MacKay as Australia’s most notorious criminal Ned Kelly (a role once played by Mick Jagger) alongside Russell Crowe, Nicholas Hoult, Essie Davis, Charlie Hunnam, and Thomasin McKenzie. Mackay, who stars in 1917, takes us back to the lawless outback circa 1860 where there’s too little food, water, and opportunity, and too many thieves and murderers. The Kellys are as evil as any of them. Ned enthusiastically carries on his family’s criminal tradition to keep them alive, but there is more to it. He is driven by warrior DNA and a voracious appetite for revenge and loves to dress in ladies’ finery. In fact, his most crucial gun battles find him and his gang in yards of lace and satin. As when he leads a grassroots anarchist army to crush the law, rivals, and oppressors. As you might expect, the film, features brutal, extended violence and scenes of criminal depravity. Justin Kurzel directs the film, which is based on the novel by Peter Carey.

This week, on the 700th Anniversary of Scotland’s Fight for Independence, comes a film about ancient hero Robert the Bruce. In 1306, an idealistic and brave Scot crowned himself King and fought for Scotland’s freedom from England. He faced constant defeats, abandonment by his soldiers, and a solitary life; he is alone and hunted by his former army. A family of poor crofters takes him in and with them he forms a new army.  Ingenuity and belief in the cause spurred them on the victory.  Angus Macfadyen portrays Robert the Bruce here for the second time, previously in Mel Gibson’s Braveheart. Robert the Bruce never had a castle but under his rule, Scotland flourished and his name is known even now all these centuries later.  On Digital platforms and VOD. https://www.youtube.com/watch?v=HRQ9ZUTYGec&t=6s

The sarcastic and totally fun animated feature The Willoughbys preems on Netflix, with an extra special team of voice artists – Will Forte, Maya Rudolph, Alessia Cara, Terry Crews, Martin Short, Jane Krakowski, Séan Cullen and Ricky Gervais – who bring to life the darkly funny story of a dysfunctional family “in an old fashioned home”. The parents pay no attention to the children because they are the very personification of selfishness, there is no food, no attention or love, and no time for them while ma and pa live it up. The children believe they’ll be better off without the ‘rents and come up with an outrageous scheme to send them on a world tour of its most dangerous, deadly places. “We’ll orphan ourselves!” Real-life cat lover Ricky Gervais narrates the narrator’s role, as the all-seeing cat.  And he warns “If you’re expecting happy families, happy endings – this isn’t for you”. Sounds beastly, yes, but in truth this movie is hysterical with top perfs by the comic actors, who really spoof it up. Martin Short, you kill me!

Netflix’ stand up comedy series Middleditch & Schwartz is something altogether new, each episode a long-form improv event. The first episode Parking Lot Wedding finds Thomas and Ben making up, on the spot, a truly funny and insightful hour of laughs based on a single throwaway remark by an audience member. Each play all the characters they dream up, involved in the wedding, the bride and groom, the priest the guests in the fourth row, that you lose track, and the situations which they create in the moment, actually go somewhere. It is organic, unexpected, and often reveals glimmers of genius. I would rather you watch than describe it. Trust me.

And here are three good reasons to catch APTN lumi, the new streaming service from the Aboriginal People’s Television network. The best reason – food. Feast with Tiffany Wahsontiiostha Deer offers recipes that span vegetarian, vegan, gluten-free, and traditional indigenous game dishes for well-rounded variety. Simple, straightforward, no baloney with health as a priority. You have never seen a person who eggs with such gusto! And her vintage wardrobe and makeup are fun, and her quiet charm is a nice touch.

Illinniq is a biography series on life in Nunavut. One episode features the traditional butchering of a caribou with conversation about the old ways of life, dating back millennia. Another eppie looks at the importance of bannock with traditional, unique, and modern methods and recipes.

The internationally popular Moosemeat and Marmalade with Canadian indigenous bush cook Art Napoleon and British classical trained chef Dan Hayes is chalk and cheese plus learning and fun. They introduce one another to their key cultural dishes and battle good-naturedly for supremacy. From fried seal and moose nose to sherry before fox hunting, its learning and laughing, and food. Catch all these shows on the APTN lumi streaming service.

And to top off our joy The Beatles estate releases the mop tops 1968 animated and highly psychedelic movie Yellow Submarine, as a sing-along event Saturday at noon. It’s a one-time-only spirits raiser complete with onscreen sing-along lyrics to bring us “all together now”.  It was the Beatles fourth film. They barely took part, and others read their voiceovers, but it’s a pioneering work of animation art, built around tapes made during the Let It Be studio sessions.  Songs include All You Need is Love, Hey, Bulldog, and the aforementioned toe-tapper Yellow Submarine.