Ken Loach is a social realist filmmaker whose films reveal the plight of the working class in Britain. His sharp focus on social, economic and other injustices has opened eyes for five decades. They are urgent and of the moment. In Sorry We Missed you, Loach turns his lens on the gig economy, an often-ruinous way of earning through freelance and short-term contracts that is so prevalent now.  Sorry We Missed concerns a couple and their two children trying to scrape together enough to feed and clothe them, one as a courier the other as a personal care worker.  They work 14-hour days, many hours unpaid.  Loach retired from filmmaking in 2014 but returned in light of the Conservative government win.  I spoke with Loach from his office in London.

Sorry We Missed You is incredibly timely and important. Many aren’t aware of the gig economy and those who abuse it or suffer in it will see its futility.

It is drawn from lots of stories. The writer Paul Laverty researched; we’ve worked together for thirty years with our producer Rebecca O’Brien. Paul did the substantive work and we met people, he drove in the cab with drivers who were intimidated by management and we listened to their stories. We couldn’t go with the care workers, but we heard their stories, how they go to six homes a night to put patients to bed travelling by public transit and not being paid for travel time.  We won the idea of the minimum wage here recently and it’s based on the fact of being paid for the full hour for a given number of hours a week. But if you’re paid for a third of an hour, that is zero hours by contracts. Employers had workers contracted with no commitment on how many hours they will give, plus you get paid per client, booking twenty or forty minutes and travelling on public transit so you can’t go home too because it’s too far away, over and over again.

Ricky the father refuses to take the dole/welfare, he wants to provide for his family himself.

The system is so punitive here regarding the dole. People must fulfill so many rules and bureaucratic hurdles the government puts in place. In a way, the government acts as recruiters for these low paying insecure jobs.  So, they go to the gig economy that’s based on online shopping and employment connected to the internet, food orders, parcel delivery, and working in isolation.

What about the idea of guaranteed annual wages, as in some Scandinavian countries?

The problem is I think everyone wants it, it’s a natural instinct, to get money and sit at home. But that can be demeaning, as far as people traditionally define themselves by their work. Our jobs are in our surnames, a trade, and we take pride in it. But to take the money and not have the ability to contribute is hard. 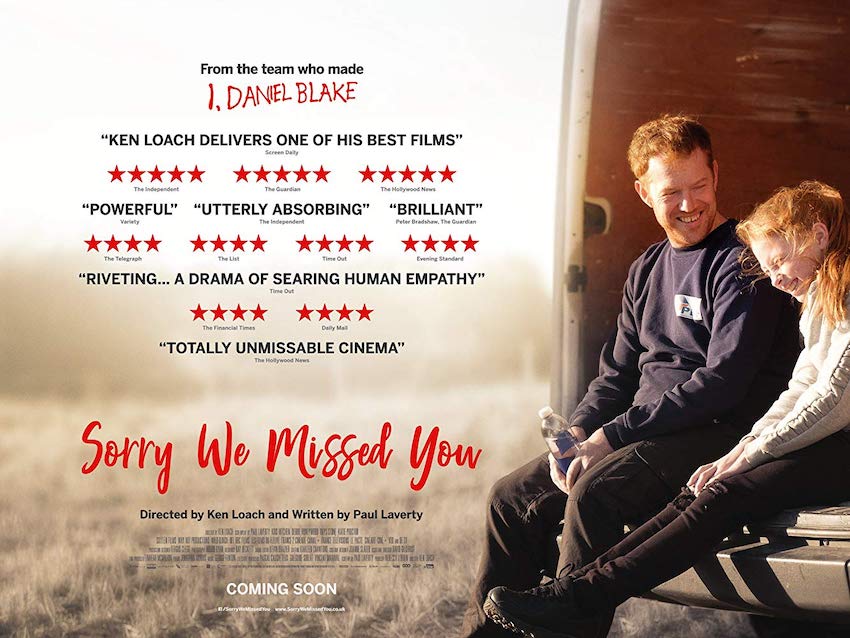 What caused the gig economy as it is today?

It goes to Margaret Thatcher and her attack on trade unions that began in the 50s and 60s. When Margaret Thatcher came to power she worked for increasing profitability to businesses and the way she could do that was to reduce the power of trade unions and organised labour, reduce gains in terms of working conditions and to make business profitable, work was cheaper. Legislation against trade created massive unemployment if you didn’t want to do your job for low pay someone else would, and gradually terms and conditions were undermined. New technology employers were in a very strong position to say you’re not a worker but an entrepreneur, we won’t pay benefits, if you don’t fulfil the job, we fine you and you are responsible.  They had to pay for equipment to do the job.  The whole power shifted from the employer to the worker to the other way around. That’s the long view.

« We Celebrate International Women’s Day with Hillary, Run This Town and Spielberg’s Back.
Vinessa Antoine Returns as Lawyer Marcie Diggs in Season Two of CBC’s Diggstown. »