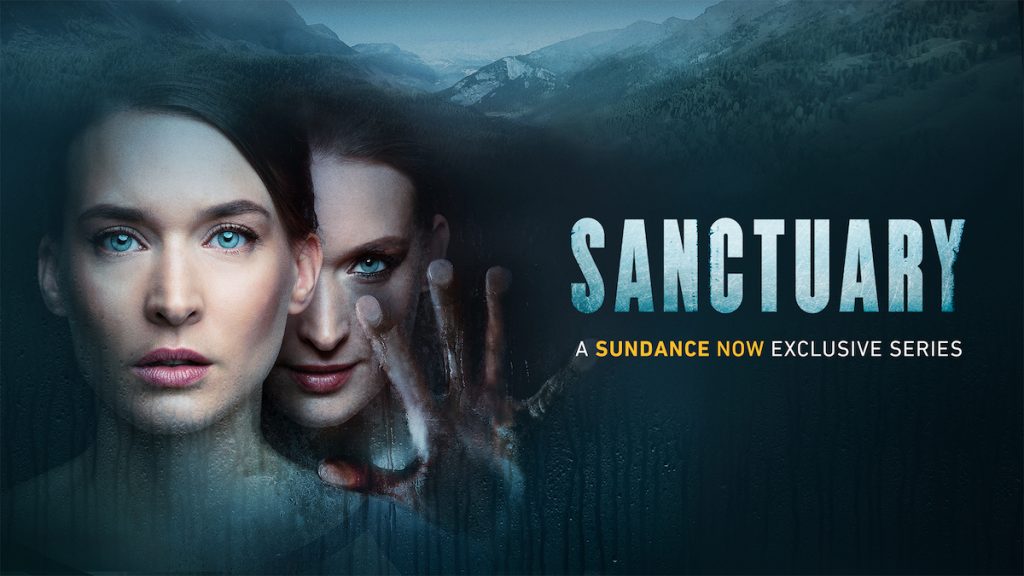 Sanctuary, based on a book about twin brothers, swaps gender in a Swedish TV series adaptation. Estranged female twins Siri and Helena haven’t seen each other in years, but Siri convinces her double to come to a facility in the Italian Alps where she’s recovering from an accident.  Helen goes reluctantly and under pressure, agrees to swap identifies for a night so Siri can visit her boyfriend.  Siri fails to return, and Helena is now trapped as Siri in the remote mountain top “retreat”, under the prying eye of the Institute director played by Matthew Modine. We spoke with Asplund about her daunting dual responsibility.

Cult and entrapment stories are frightening, we see so many in the news.  Some people are trusting, and some people are wary.  Helena reaches out and Siri betrays her.  Equal parts of the whole entity when one person is vulnerable.

Yes, some are more vulnerable than others. Also, the typical characteristic of psychopaths is to use others to get what you want even if it’s not conscious. A way manipulating others is very common and Helena everything she does, reminds her of Siri, because no one trusts her to be who she is.  She’s in her sister’s body and world and she can’t get out of there.  It interesting that the show is airing now because we are all locked in our homes and can’t get out! 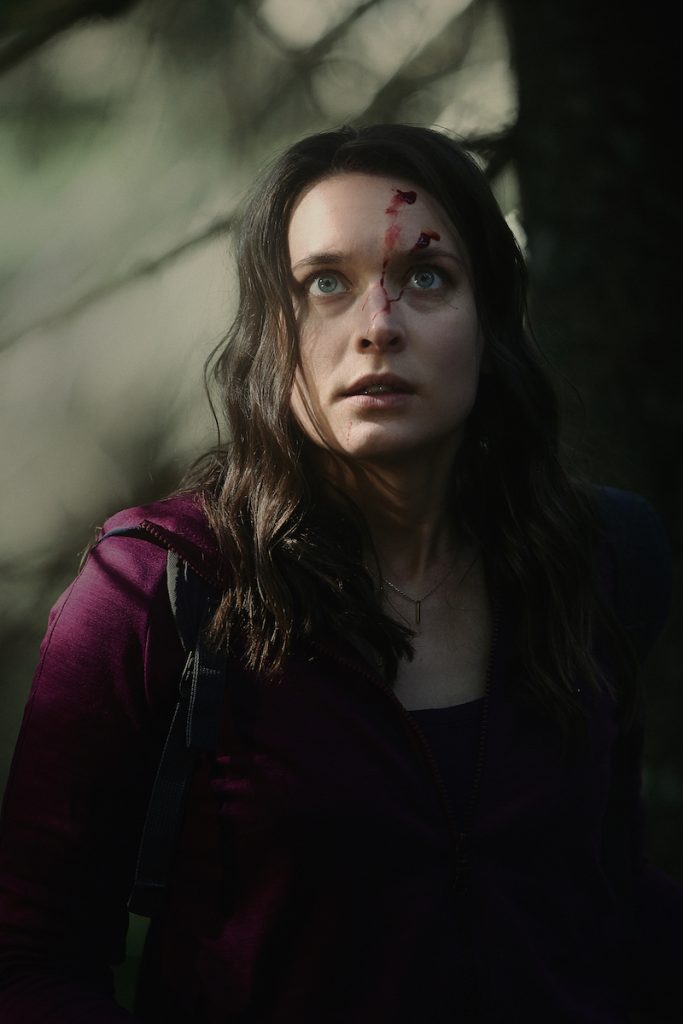 Did working on this project make you wary of people?

More doubtful in a way, more than I understood.  In real life, there are a lot of psychopaths around us, but they don’t have to necessarily be dangerous. When I started to think about it, I realised my previous boss must have been a psychopath and then you look and say that’s very much like this person or that person has similar characteristics of psychopathy.  For me it didn’t scare me, it made me understand different hosts, like Prime Ministers or Presidents or people who have to fire people every day. They might not have empathy. I think that’s more usual.

The rising sense of panic is interesting. You must keep the level of suspense appropriate for each scene.

When you think about it, someone who is locked in and can’t get out, they’re in a dangerous place and anyone would go crazy, feel very separate, and want to get out. There is a point where Helena realises she has to play along and be smart, at the beginning desperation to convince them she is not Siri. We all play with the idea that it’s all in her head or this is all Siri. We don’t leave it completely open and they are who they are. I enjoyed being with Helena because she has to be smart, she can’t just sit there and solve this on her own, she must lay low a little and plan. 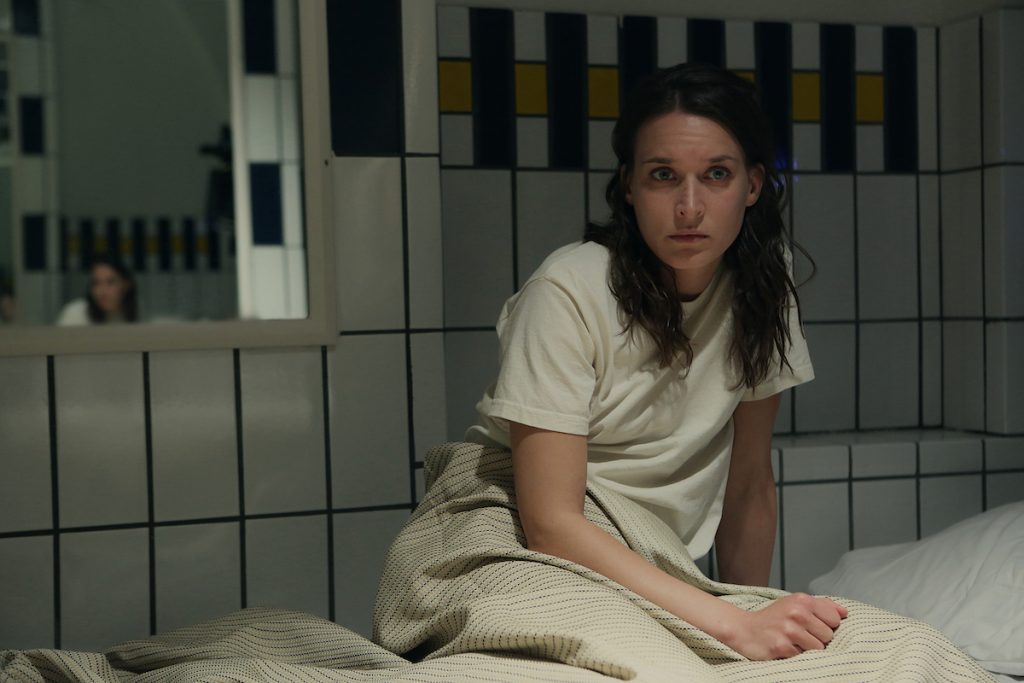 Does working on this story like this make you wary of people, institutions or governments. The Sanctuary is patrolled by drones, there’s CCTV everywhere, high tech surveillance, a real Doomsday feeling.

Its definitely like it’s happening and that was central in the screenwriter – Charlie Fletcher’s mind.  When he wrote we are all locked in somehow, we’re all being observed, tested and so it’s timely, and it’s all happening.

Working in that beautiful location in Italy, that takes on such darkness.

Coming to the alps was incredible. We’d been shooting in Rome, we did the interiors in Rome in the hospital not the cabin, but a lot in Rome. It was 40 C and crowded and the air there isn’t the best to breathe.  Then all of a sudden, we stepped out in the Alps, the fresh air and landscape, and it gave a lot to energy to everyone.  We worked six days a week for two months outdoors. It was beautiful and at the same time we had to have it in mind we were trapped here, I can’t get through the mountains, it adds a lot of feeling of being on the outskirts. But it was wonderful. I’ve never shot in nature, except in grey Ireland for Vikings, so it was really beautiful.

I can’t imagine how extraordinary it must be to play twins.

I never worked that much in my entire life. I had some days when I’d slip from one character to another a couple of times. It was definitely a bit of a mindset going from one person to the other and one of them is a psychopath.  I did a lot of research on the female psychopath just trying to understand as I usually do when I start shooting, the typical characteristics and behaviours. I also make up my own stores about the characters.  In the book it was two brothers, so it is very different from the TV show.  Mainly I just tried to read a lot about the subject.

What technical magic did you use?

I had an actress stand Isabel Orving, she would dress as the other sister when and then we swapped. She’d know all my lines, so I have someone to play with, a face to look at, it would have been a lot of work otherwise, very difficult. At the same time, my reaction might not be the same so I would have to remember how the other one was. It was quite a lot to keep in your head, wait Siri reacted this way, or Helena that way.  Technically Isabel was a stand-in in a bodysuit in the white screen shot, walking next to me, and then we used split-screen making sure our bodies wouldn’t cross.  And there were technical and special effects,  but I don’t know about that!