Actor Graham Greene is nothing short of an arts phenomenon. Having worked steadily in film, TV and spoken word since 1979 and in theatre longer, the Oscar nominated, Oneida-Canadian has played every ethnicity, in all kinds of genres and mediums, a familiar face around the world. In 2015, he was named a Member of the Order of Canada. Greene stars alongside Richard Dreyfuss in Astronaut, a character driven story about a man who dreams of going to moon, confiding all to his new friend who lives in the same retirement home. Greene is Len who is semi-paralysed and doesn’t speak; Greene gives him what he needs to express himself. Its incredibly moving thanks to his interpretation of the character and his condition. We spoke with Greene from his home outside Toronto.

I have a broken foot! I was taking the laundry and bumped into a table and told my wife I busted my foot. I’d broken my little toe in two places.

No more laundry for you. Is there anything you can do about it?

No, not a thing. Just wrap two toes together and wear an air boot. I was up in Quebec working on a film with this air boot and I asked if they were going to shoot me from the waist up and the director said “Sure!”. And I did most of my scenes sitting!

Len, your character in Astronaut lives in a nursing home due to physical problems. And he doesn’t speak.

He had a stroke, the only two words he says in the whole film are “You go”.

People compensate for lost abilities with new ones, what was his superpower?

Len couldn’t talk, he just sat in his wheelchair with one good arm and he watched people and ended up observing people and learned what they wanted. He and Richard’s characters became partners. They were getting close.

Astronaut’s about a man’s determination to achieve a dream. Maybe you had a dream of international stardom?

No, not really. I had no idea and didn’t plan on it. Some people some people work very hard for it and it doesn’t come. I got lucky. I always say to kids, star falls in your path pluck t up and put it in your pocket. I just happened to tumble into it, music industry technician and one day somebody approached me to do a theatre workshop. That’s a long story right there, but I did a short demo film of a John Stoneham book.

Your career is so strong. You’ve covered the gamut of characters in 159 film and TV projects alone, plus theatre.

Maybe, but on this movie set recently, a kid was sitting in my chair onset and I said “Can you get out of my chair?” He didn’t, I said “I’ve turned down more films than you’ve been in!!”.

I’m going back to Quebec Sunday to do more work on the film.

I signed a non-disclosure agreement so I can’t talk about it. It was so much paperwork, initial this, sign that, pages and pages. I did this motion capture film, you now, the ones where they cover you in dots and put this thing on your head with a camera in your face, looking at you. We’d all signed an NDA. And suddenly the security guards rush us all into the cafeteria and lock the doors. So, I’m sitting in the cafeteria and ask what’s going on. There was a high school bus tour coming to the studio. They all had to sign NDAs but you know what high school kids are going to do on the bus? Text! We were shooting in a studio in the old Drummond plant on Long Island where they were in the same building as the lunar landing set.

What a story. I hope you’re writing a book.

I write a couple stories a week, just anecdotes.

I remember the Dances with Wolves junket in Washington and you were there. Amazing film and experience.

Funny thing about Dances was when the lights went down at the première, a minute in the screen went dark. A light bulb blew. I saw Kevin (Costner) running up the aisle and found him hunched over with his head in a potted plant. I told him they were going to start it again, and it was only a minute. The film will speak for itself. Then three hours later is was over and three hours later I couldn’t believe it was over!

Are you still doing theatre? 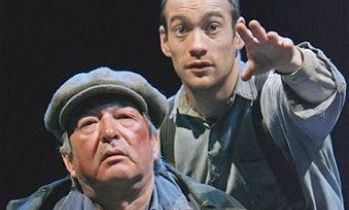 Of Mice and Men, Stratford Festival

The Merchant of Venice, Stratford Festival

No, it wasn’t. Both plays were so long, three hours. But now I have asthma and its tough.

Thanks so much!! Hope your foot feels better soon.

« Simba Up Against One of Moviedom’s Great Villains, Awkwafina Amazes, Krazy Karate Kid, How Deregulation Creates Homelessness and a Brilliant Chinese Indie a la Fargo
Quentin Tarantino Messes with Us for the Ninth Time, a Canadian Space Tale Character Study About Longing, The True Story of the Hunt for Jihadi John, Female Led British Military Series, and Veronica Mars is Back in Town »