Irish actress Amy Huberman who you may remember from the law drama Striking Out is shows us her funny side in a series she wrote and stars in called Finding Joy exclusively on Acorn TV.  Huberman plays Joy, a newly separated, confused and yet somehow hysterically funny television researcher. When the host of a vlog show leaves, Amy’s thrown into the job, with no experience, no backup and no confidence.  But, she happened to be in a place at a time and filled a need. And then the unthinkable happens, her quirky, new girl antics and brilliantly amusing self, works. She’s a sensation.  Finding Joy breaks a lot of women in TV boundaries including the one that says a dog can’t narrate her series. I had a fabulous time speaking with Huberman from Ireland. Well, I’ll let her take it from here.

Amy, where are you calling from, out of curiosity?

I’m crouching behind the couch in the TV room in the dark. The battery on my phone is dying and I’m plugging it in and talking and trying to be quiet because my family is asleep but in the broader geographical sense, specifically, I’m in Dublin.

Joy is such a wonderful character. She’s got it all, anxiety, irony, black humour!  She’s my new hero.

Thank you, that’s exactly what I wanted her to be, that part of every person that feels those anxieties and says how am I doing this? Do I want this? And the growth and fear and questioning and love and friendship and everything in between.  She’s someone looking at her story from a different way, she can be quite resolute in her beliefs and she’s not the most popular person. She needs order and to manage her anxiety. In a way it’s looking at that thing and going am I happy? Is it ok to be happy enough or do I have to strive for everything and climb mountains every day. It’s what I am, ok. I want to paint her story very carefully and be true to what I wanted her to be.

Ok, I’m going there.   This is a TV first – a leading lady with a gas problem.

When I first met my American agent, I just got off the flight and, well, Irish people use the word “gas” to mean “funny”. We were having a chat and I kept saying that’s gas. And he eventually said why are you telling me this?  That was so funny. He thought I was telling him I had a flatulence problem!  I can laugh about it now.  I just had the strangest feeling, that poor Joy has a noxious gas situation, from nerves. Hand on heart if that has not happened that someone released a bit of nervous wind. Poor old Joy!

You wrote the show and Joy. It doesn’t even seem like performance, it’s so lifelike.

Absolutely.  With comedy there are so many different ranges with tones and I’m obsessed with that but also confused by it. In comedy you’re always trying to fit yourself into the world not under or over-playing or going somewhere higher or stranger, but I had to find a through line for Joy that would tie those two lines together and be truthful and play the madness and heightened reality. Making sure they blend they over the course of the series. I love the comedy genre and really enjoyed working and watching the show grow from the first day.  Well, aside from the first day, after that I had the time of my life.

Being able to write and act and do it all is a great advantage. It gives you control and material that means something to you.

It really does. At the beginning, the show thing happened so fast.  I said what am I doing?  I can’t do this! Who am I writing for?  What will it be?  I had to shut all that out and see the universal audience. I also had to write for myself and wonder if another person would find it funny. You can’t worry about it because it can get divisive and subjective. I had to do it for me and it was amazingly freeing and the responsibility and the fact it was going to be a lot of exposure.  Usually I’m an actor for hire, part of a big machine, you do your best, but this felt very different. I had nowhere to hide. The thing is like Joy’s story was parallel to mine. She’s thrown in the deep end and has to sink or swim; I was having this experience with her. I had to pinch myself. I always wanted to do this as a writer and performer and to fulfil that and enjoy it.  We worked our asses off and had doubts but it was a real labour of love and I did it and I’m really happy to do it as well.   We only had five weeks of shooting but I laughed every day, sometimes hysterically. We played and enjoyed it and it was really fun o hand my script over to the actors and crew and let them breathe life into it. 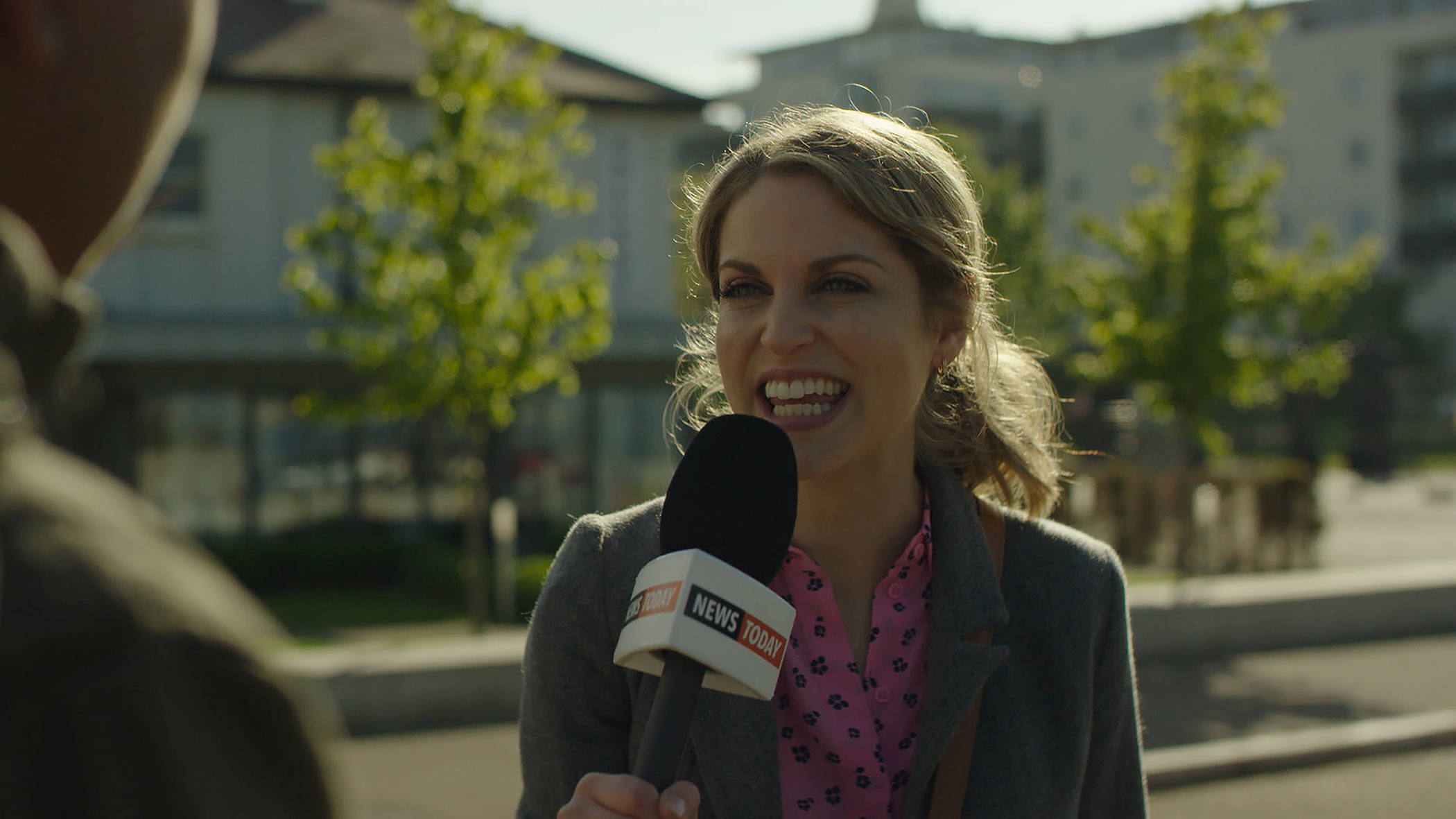 It was sensory overload seeing someone else doing that.  I would forget to speak.  Oh! I’d think, I didn’t see that!  Then we settled into our groove. I got so lucky with our cast! You have this thing in your head and it’s gorgeous to play it out and the actors gave it light and shade and actually took it on themselves to use their own personality. There was a whole new life in it. It was incredible.

And how brilliant to have Joy’s dog doing narration.

Originally I wanted a voice over bookending every episode. Joy was in her room, her safe place and because she’s not quite expressive or emotive there I dint know how tell her story without her voice. Having the dog. An emotional being, helped set the landscape.  He tells her story and we empathise, he gets her.  He knows her quirks and that she’s lonely and not dealing with that herself. Beyond her broken relationship, she’s isolated herself. He knows that she has this heart and expresses it in a way that she gets through.

Amy is suddenly catapulted from research to presenting on TV and she’s a surprise hit against all odds. What made her click?

I think when we were trying to figure out what her job would be it had to be believable. She was completely without experience on TV but became a vlogger in a big media enterprise. I was trying to merge those two worlds and make it believable. Flora, her predecessor was polished and Joy is not, but actually became the eyes of the regular person. She would feel silly and it became quite real extension of every person thrown into the deep end. You see she doesn’t do it perfectly. People would say to her I love that thing where you act like you don’t know what you’re doing, and she doesn’t!

I also really enjoyed Striking Out, a drama series in which you played a lawyer, another great female part.

I feel really lucky that I get to do dream and comedy and that I’m not pigeon holed in a genre. It’s really nice to flex different muscles in that way.  Comedy for me works best when it has those dramatic beats and real heart.  I like playing in that world. Striking Out was very different. At the time I had done comedy leading up to that and it was nice to lose myself in a really serious role.  If you can have that variety, you’re lucky.  I hope to connect with viewers and tell all kind of stories.

Do you have a desire to “go Hollywood”?

I’ve been to the US a few times, and did a pilot a long time ago. I have friends in LA and go once a year because I love it.  I like taking writing time and pilot season. It’s tricky when it’s over here in Ireland but I would love to spend time in the States. But I don’t want to move my family there if it’s not the right thing. I would love to work there. I love American television. Now that Finding Joy is coming out in America on Acorn I can take it from there.   I have auditioned and had jobs there and I had a short-lived visa. It’s been great to do series in Ireland but you guys make so much and it’s usually good. Such amazing shows and all the platforms and network television and shows from elsewhere.  There is so much original content and shows travel a lot, we can all share now. That’s brilliant.

Thank you so much, Amy!

Ouch! I think I’m stuck behind the couch. I’m wedged in here.