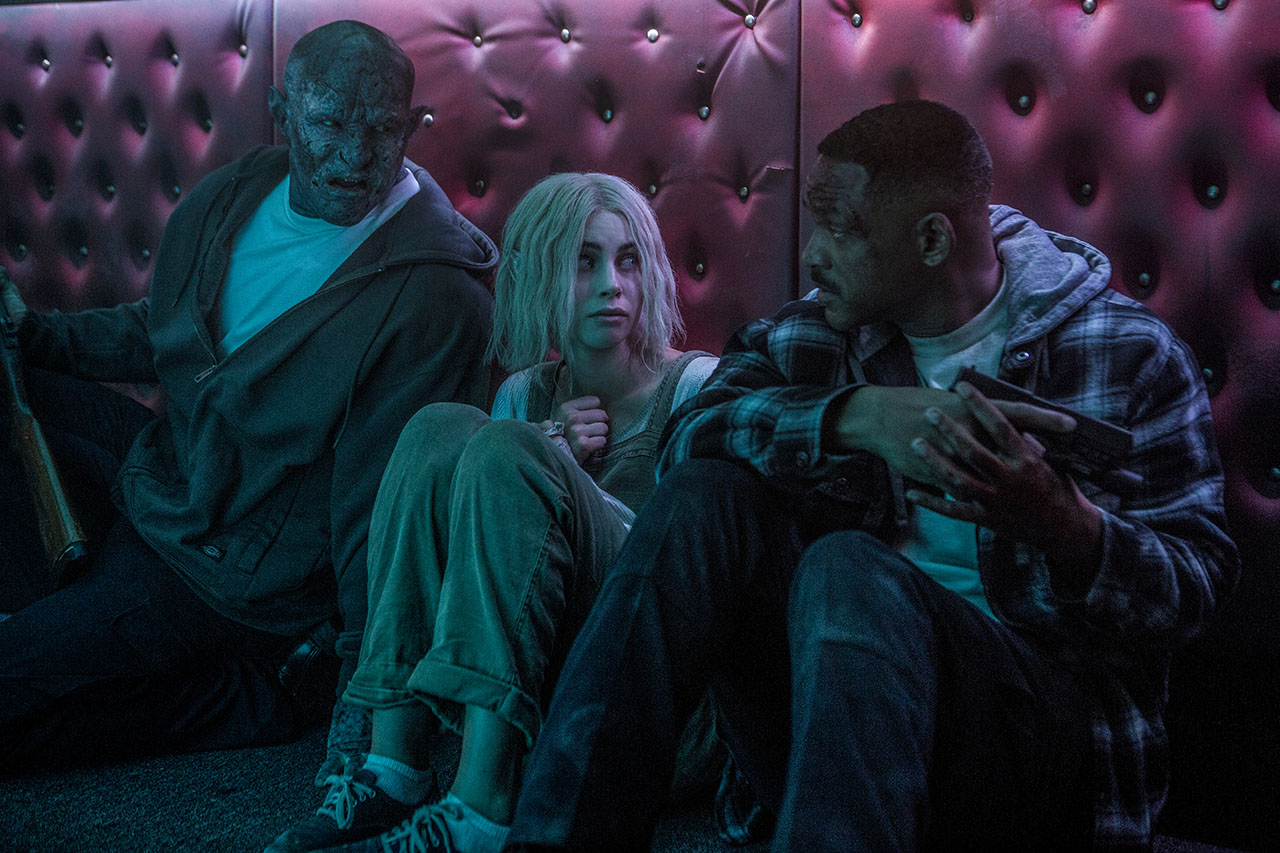 Joel Edgerton, Lucy Fry and Will Smith in ‘Bright’

Lucy Fry, a young actor from Brisbane Australia plays a force for good in Netflix’ sci fi cop movie Bright.  David Ayer’s dark fable is set in a dystopian Los Angeles torn apart by racism and crime and on the brink of collapse.  Fry is Tikka, an Elf, and she’s just escaped the death cult run by her powerful sister (Noomi Rapace) to find a better life that she knows is out there.  Tikka joins forces with a human police officer played by Will Smith and a lower class Orc officer, played by Joel Edgerton. You won’t recognise him! Their mission is to rid the streets of crime, eliminate the Dark Lord and take back the city. Fry’s role is physical and symbolic and as she told us in Toronto, has unusual depth.

Will Smith is the might of the story as an alpha male human cop but Tikka is the heart of it. She has the moral high ground and a powerful desire to bring on the new.  How did you find her?

There was a process of getting to know her because she’s so mysterious; it took a while to figure out what she wanted and what she was doing there. She’s in the cult that worships the Dark Lord because she realises the way the world works and this illuminati group wants things to go their way but it’s not OK. She’s having this inner breakdown revelation. she wants to be good, she runs away from the cult when she meets Will’s character and they go on this ride together to learn how to trust people again and how to find the goodness in people and fight against that for her family.

Tikka had her own language, a created language that you wouldn’t know. How was that?

David Peterson who created the languages created this one so, I was super diligent studying and I spent months learning it.  Joel made some comment about “Haha isn’t it funny that David takes it so seriously and corrects you on pronunciation on words he made up?”

Yes and no one would know. It was very specific. I took it so seriously, I’m going to be the best Elvish speaker ever!

You and Noomi play Elvish sisters and it’s pretty intense.

Noomi and I, she gets really deep into her work too. We really let ourselves transform while shooting and we both had dreams as our characters.  Tikka’s running from Mila and David knew I was in awe of Noomi because I love everything she’s done.  He wanted me to stay separate from her so I wouldn’t be intimidated. In the final week of filming we finally had these scenes together, we were shocked and stunned. She said we haven’t been working together but our characters are sisters but we are connected.

The depth of connection we felt in the final scenes was really powerful. I had been drawing and as filming went on I got better. I would draw Tikka images to give to David. There was one picture I did of Mila and Tikka floating together in a womb just like in the scene in the water together.  Dreamy image and then David created this underwater scene and everything became very interconnected, scenes would give us dreams and it all became this real work to me. Doing the scene in the water together, it was like we were two children again, floating in this womblike blue water.

Will Smith had a tough role and a lot of work. How was he on the set? 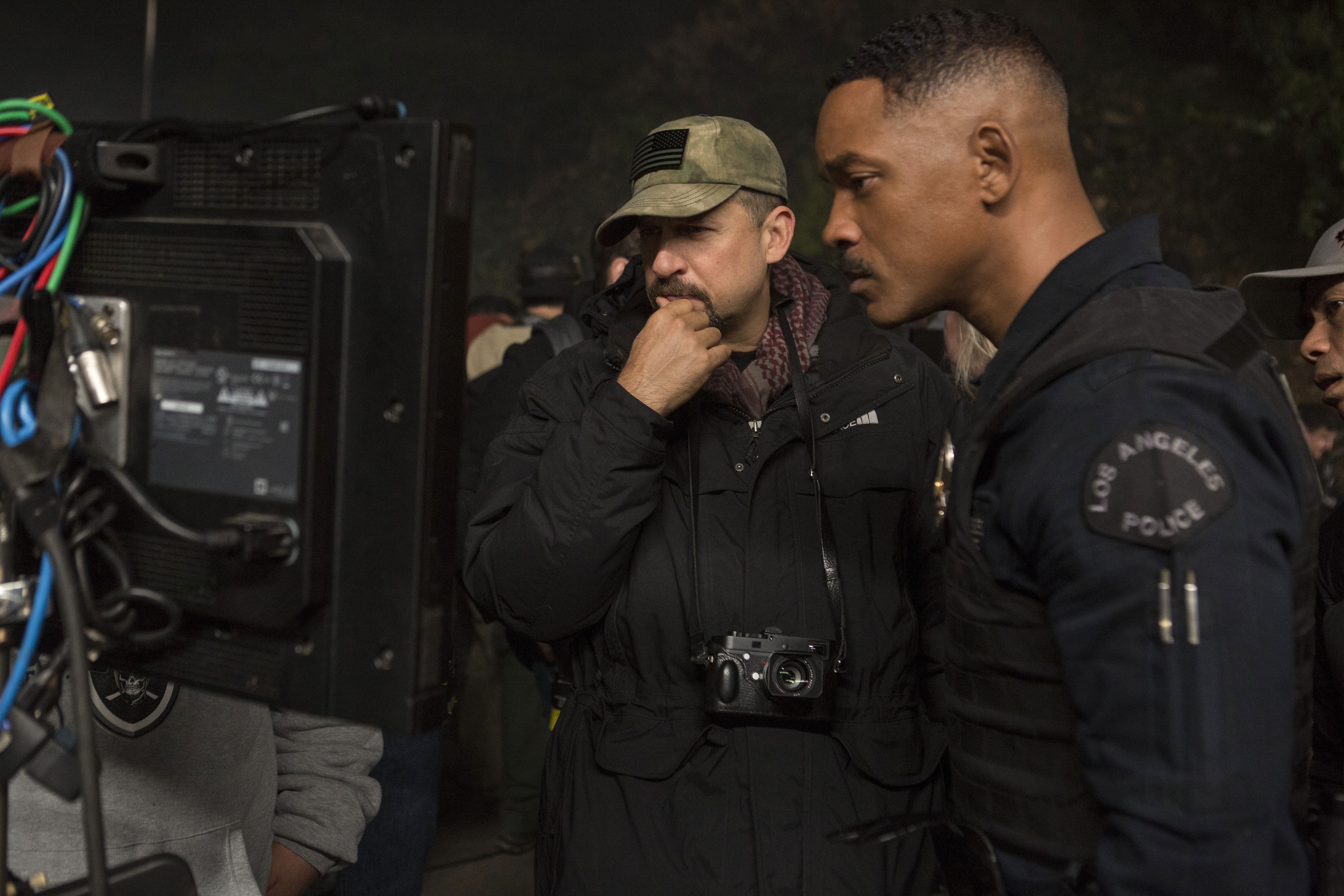 Did Joel Edgerton really look like that or was his face computerised?

He did look like that! Every day! It was prosthetic plasticine every day a new mask they would paste on him and rip it off at the end of the day. They could never reuse it because it was moulded to him, it looked so real. I’d been in an alley in downtown LA and I’d be looking at this orc and Will Smith and I’d wake up the next day and think that wasn’t real, that was a dream.  Especially because Joel transformed so much, even his beautiful voice for Jakoby, gentle and dry and earnest and trying so hard to be a good human even though he’s an orc, his journey is wanting to be accepted.  It was amazing to see his work.

You’re incredible. It looks like you did a lot of your own stunts and physical work.

Yes, I love running and jumping and diving and the physicality of the role, and I was so excited to do it. For the really difficult flips someone else did them but every night I was like “I have to do it!” and I’m climbing the walls and swinging off drainpipes.

You’re like a flying squirrel – boom! But I guess the producers don’t want you to do the toughest stuff in case something happens.

Well there was one time when we were filming in a basement and I just started climbing everything, and David said “Pretend youre hamster trying to get out of the cage.” So I was literally going up the wall, I swung on a drainpipe I shouldn’t have touched because it was a really rough drainpipe in an old apartment basement.

Then I found a water heater so there’s a scene where it all falls over, but it wasn’t meant to happen. I was sitting there and I saw it start to go and I’m like “Nooooooo!”  I felt really bad the sound stomped on Will Smith’s line and I’m like “Oh no, I stomped on one of Will Smiths lines! I’m not supposed to do that”. He was so nice about it but I was so embarrassed.