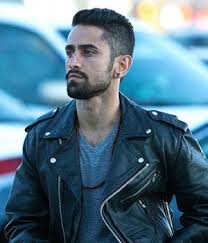 Deepa Mehta’s brilliantly coloured, spirited and often funny story of Sikh gangsters in Vancouver is a fascinating mix of crime, fashion, community ties and killing sprees. It’s all new territory for Mehta as she follows the Beeba Boys, or “good” boys, stylish young men dealing in arms and drugs who are, at home, traditional sons who dote on their mothers.  But Nep, played by Ali Momen, has a dangerous secret.  We spoke with Momen in Toronto during TIFF.

Good Boys. Anything but! It’s amazing, the nuance of life. A son no matter what he does or who he is has a close relationship with his mother. Like me and my mum. If I was a drug dealer I’d still be scared of what she’d think because I respect her and eat her food, she brought me into life.

The Beeba Boys are good boys at home, very bad boys outside, but your character has an even tougher situation.  It’s all illusion and reality. Is that a special acting problem?

You cannot overplay it. I went over the script, and over and over, with Deeps in her kitchen – she really put me through the wringer. Nep has a million pounds on his shoulder when someone has that kind of weight on their shoulder it’s hard to move. I embraced stillness and being full but not foul.  At any moment especially when you’re leading a double life you can’t be too bold. Just be there.

Deepa was surrounded by male energy and never did a film like this before.

She was the ultimate gangster, her bravery. What I think a gangster is, not the criminal activity, is the spirit if doing whatever the hell she wants.  She changes her mind all the time. For some actors, it was hard because they prepped so hard.

There’s a scene in the aquarium, it was beautiful with a Beluga whale in the shot, just incredible. For two years that scene was in a bus and two days before we were shooting, we got a memo and it was like alright!

I was aware of division in the Sikh community its religious not criminal.  Never heard of Sikh gangsters and guns and drugs dealers.  I was surprised.

I’ve heard shades of it, I’m not India but I have Punjabi and Sikh friends and I heard of it. Going through the script and researching and googling the events that happened in the film that seem sensational, I found there is always a news article that corresponds to it. It reminds me of The Godfather, there was crazy stuff.

And similarly the gangsters are portrayed as appealing people.

Yes, they’re human beings, what do you think? Not the snarling, pre-realism type before the shift that happened in arts and acting.

The Beeba Boys style is important in the film.

No socks!  It’s something in the newspaper that Deepa was a year ahead on the style. Maybe she knows if it doesn’t work out for her as a director she can be a stylist.