David Lowery’s ground breaking psychological drama A Ghost Story is a rarity. It looks at life and death 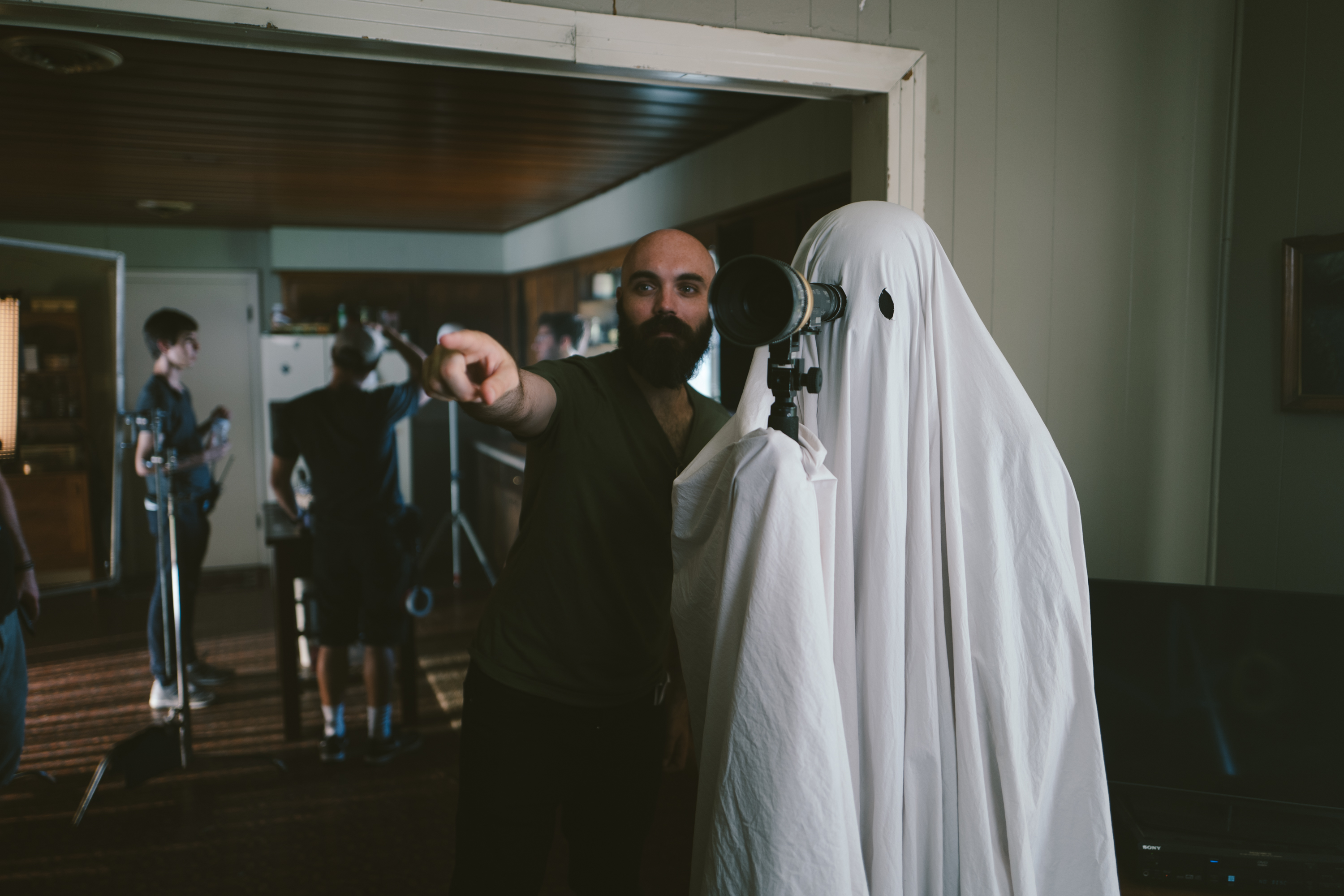 from the point of view of the departed as they suffer and journey to wholeness. It has tremendous emotional, intellectual and spiritual scope, unusual territory for ghost stories.  It crashes through time, lifts the curtain between life and death and brings new meaning to the word “haunted”.  Lowery shot the film in secret, collaborating again with Casey Affleck and Rooney Mara, from his film Ain’t Them Bodies Saints?  They play a couple living in an isolated, decrepit house in rural Texas.  Affleck’s character dies suddenly then finds his way home from the hospital.  He watches his wife move away and the people who lived there, past present and future as he waits for her to return.  Affleck’s performs most of his role under a hospital bed sheet with eyes cut out, his character, the ghost, seeing all but paralyzed, unable to let go.  We spoke with Lowery in Toronto who realized after the film was made how personal it is.

A Ghost Story moved me so much; I was thunderstruck. There is so much we don’t know in this life.  Something powerful must have sparked this story path for you.

It’s funny to think about the beginnings of that path because they didn’t feel remarkable, there was a curiosity, fear and an image but there was nothing in my life to inspire me to make this film. It was far more spontaneous than that. I feel that the movie is inclusive of so much when was writing and shooting, those things weren’t on my mind. It’s only now that it is done that I am kind of unpacking everything it contains.

The root word of inspiration is breath. Seems like the story came to you fully formed.

I think so. I think if I thought about it too much it wouldn’t have turned out the way it did. It was like breathing, it came out in a very meditative way creative and focused and fashioned very quickly and without too much oversight on my part. That has allowed it to become what it became. 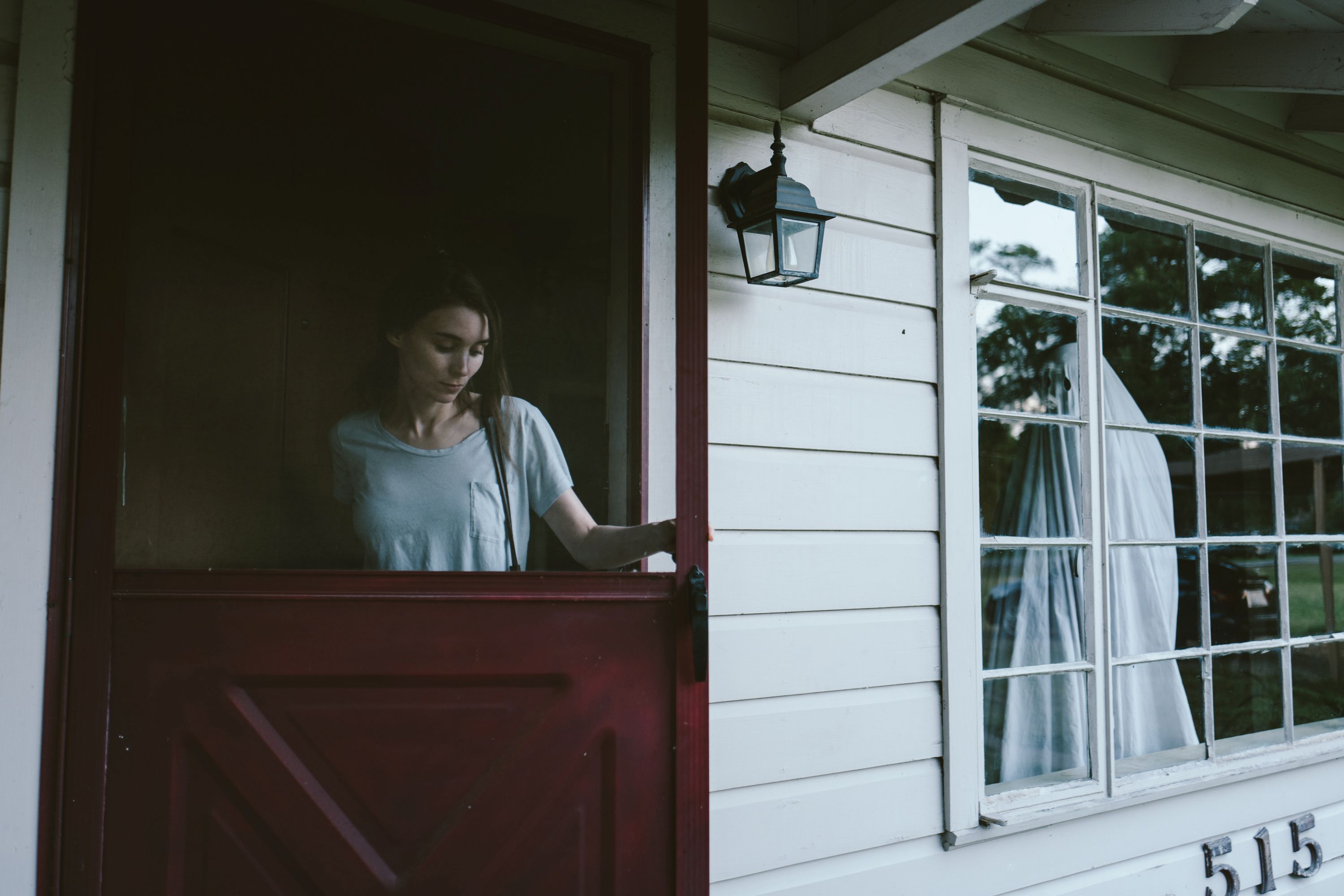 The weirdest thing is that your idea of afterlife you present makes perfect sense; it’s like extreme ageing where there is an obsessive focus on the past and nothing else.

There was the fact that I am a nostalgic person who hangs on to everything and become sentimental to a fault over my own past. I cherish my memories to a detrimental degree and I very specifically don’t like moving because I get very attached to the places I’ve lived in. I have used the symbol of an empty house in all of my movies and this was the most acute usage of it yet and the one I allowed myself to deal with the idea that I am never going to go back to the home I grew up on as a child. I’m never going to walk through that door and live there again, that’s over.

It’s important to me to acknowledge that and let go of it and move on. It not every day but my tendency is to hang on to the past. The fact of the matter is that I have a closet full of childhood mementoes and old letters people sent me that I cart around when I move and the fact that my wife and I had to leave the first house we lived in when we got married to move to Los Angeles where I was working. That was very destructive to our relationship and lives because it was difficult for me to let go of that place.  To be able to address those things worked for me and this film allowed me to tap into that. 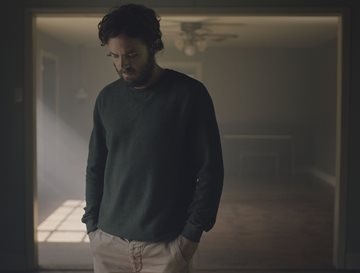 I think you tapped into something we all experience, nostalgia, and that it can change lives.

It really can. It can overwhelm a life. The ageing of ghost to me was the idea which only came out since shooting. The ghost is the one that’s haunted and that for a haunted house movie that is a pretty meaty perspective. But I didn’t think about that in those terms while we were making it.

I knew it was going to be something different because it was a ghost in daylight. 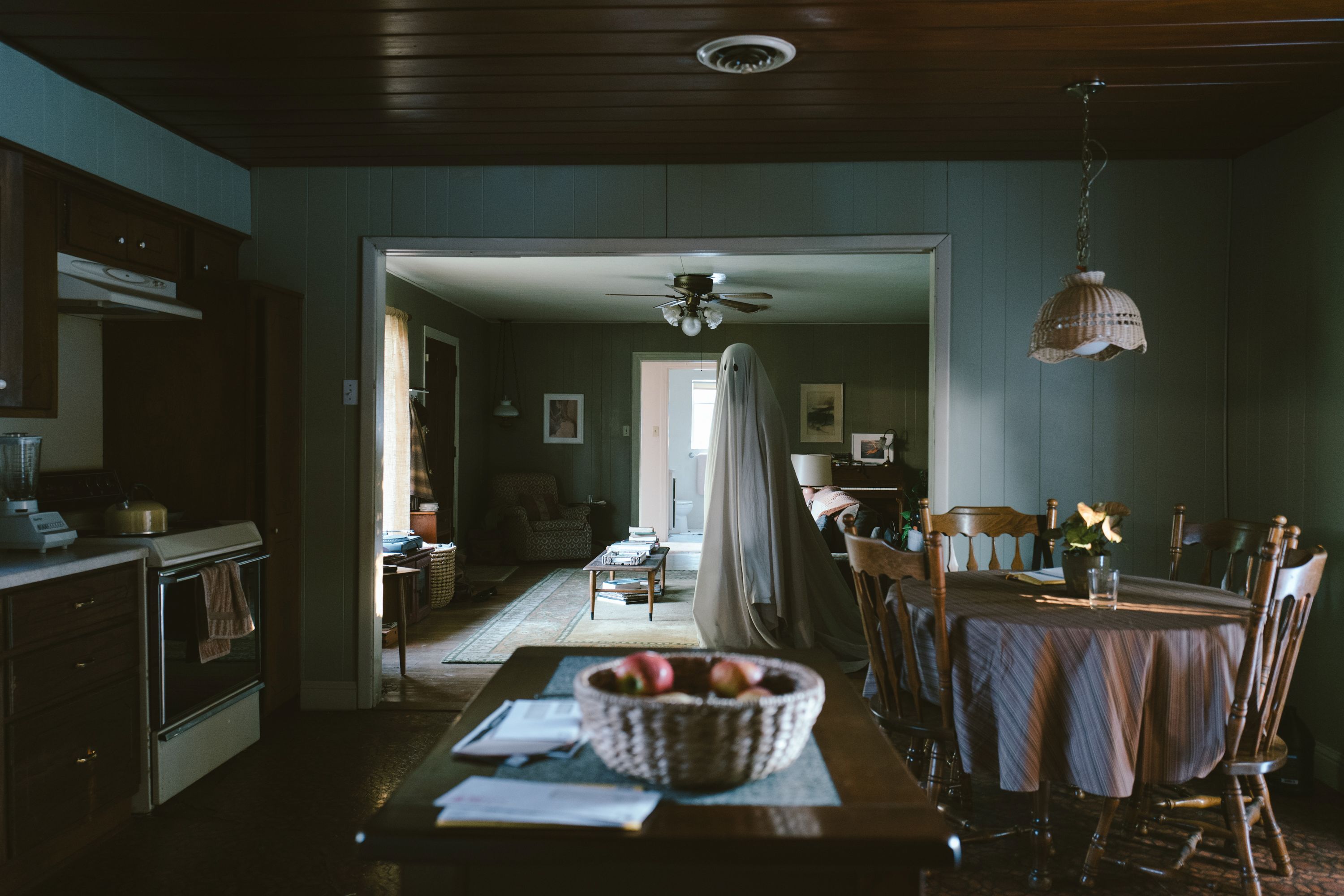 Yes. That goes back to one of my favourite films The Innocents with Deborah Kerr where they see the ghost in broad daylight and it doesn’t seem right, it feel so wrong, so strange like she should not be there and its very unsettling and I like the idea that ghosts are something that exist not just in the dark corners of spooky long hallways but are just there day and night. Spirits can be in the daylight.

You give us this friendly view of the afterlife, comforting. Anything can happen, we don’t know what, but this is comforting.

Yes, I find the movie very comforting. I take a great deal of solace in it and there is nothing prescriptive about it. I’m not suggesting this is how I view the afterlife by any means but I am leaving the door open for lots of possibilities. And that in and of itself was comforting.

Casey Affleck gets everything across even though we can’t see him for most of it and he can’t speak. He is under a sheet with slits for eyes that change shape subtly through the film. He did a phenomenal job.

He just had to stand still. Initially we thought he would be performing more under the sheet and there would be lots of body language but I felt that was wrong, it looked like a human being under a sheet and we wanted this ghost despite its handmade qualities to feel like a spirit.  It wasn’t until we began removing his performance that the performance started to shine through.

Little things like the turn of a head spoke volumes and a little gesture, tilt of the head or a few steps was all he needed to do. It was about restraint and patience because a lot of it involved just standing very, very still and his instincts would be to move or engage in some way but he had to ignore those instincts. It was really just pure patience. 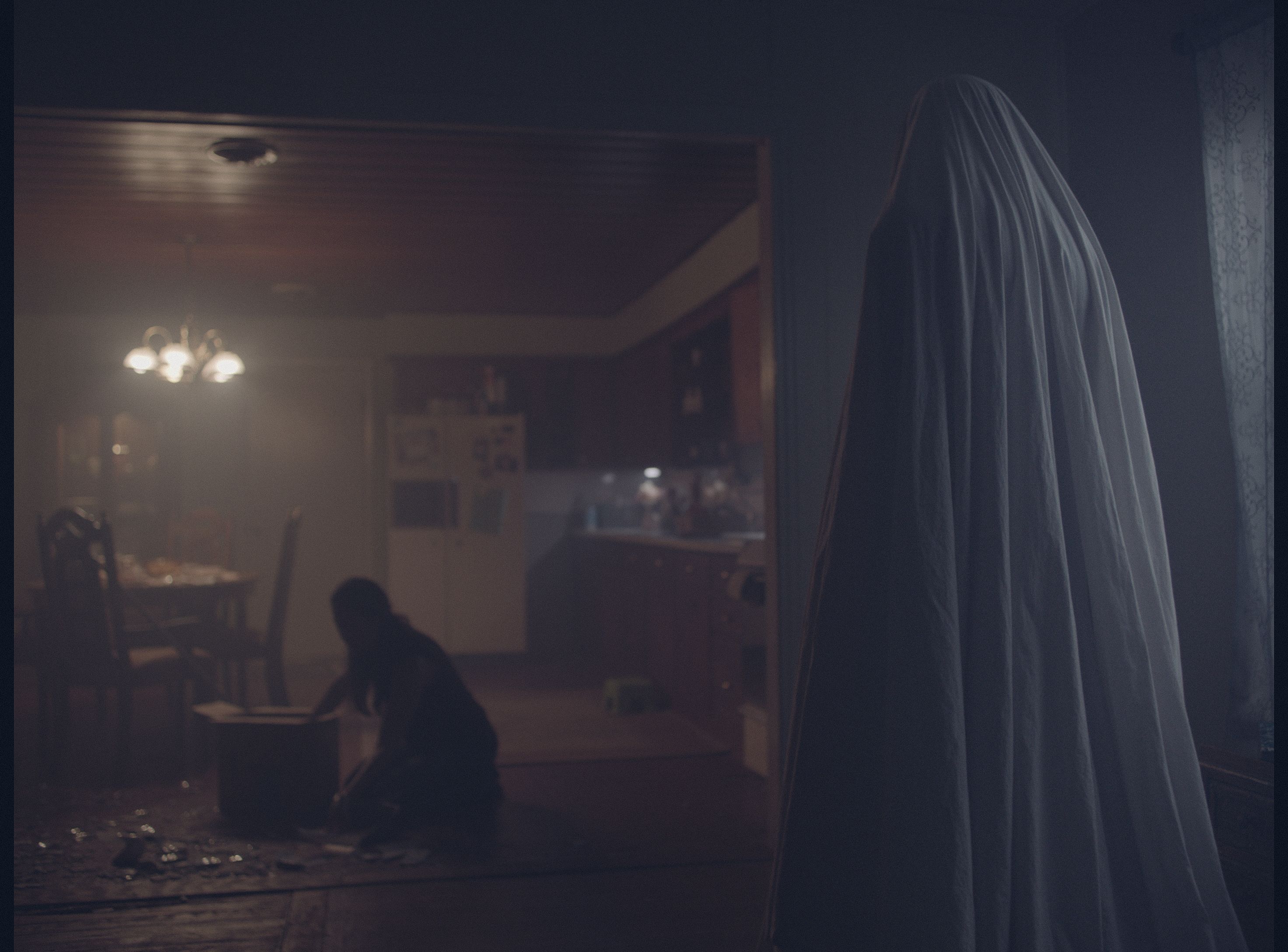 The one time he makes a sudden move he’s in the house and a bulldozer comes crashing through.

He whips around! We shot those shots separately for safety reasons. And so I said “Just react as though something huge just happened”. We didn’t expect the house to fall apart as much when the bulldozer came through so it was almost like not enough.  If he had really been there he would have been ducking for cover because the whole roof just came crashing in more than we expected. And post production, we made it all work.

Are you looking forward to directing live action Peter Pan for Disney?

I hope so. I hope I’m looking forward to it. I’m trepidatious because it is a property beloved by many.  The last Disney movie I made was under the radar Pete’s Dragon, a lot of people love the original but Peter Pan is one of the top five or six classic Disney movies in their library and I want to get it right but I don’t want it to be redundant.

There are things in the original that won’t work today and you want it to be fresh but you also don’t want to disappoint people, so there is a lot of responsibility. And I also had to not think about it too much because I’ll be paralysed. So looking forward involved a lot of elements, but in short, if it feels right and we’re still working on the script, and gets to the right place, then yes absolutely!