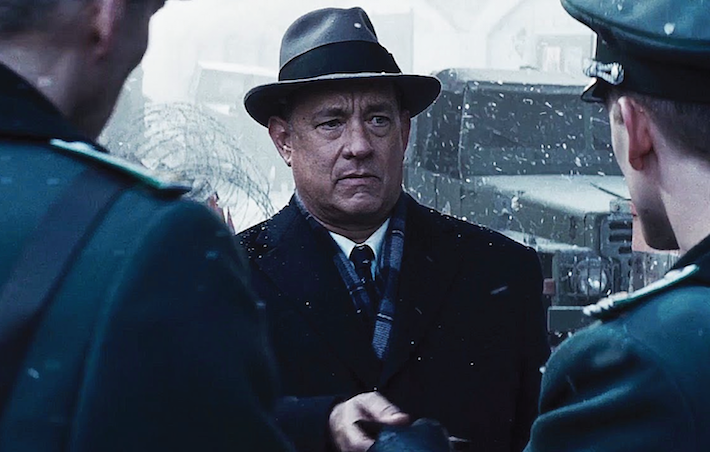 Written by Ethan and Joel Coen and Matt Charman

Steven Spielberg is a master filmmaker and one of the greats. He was a keen student and cinema boy wonder and watched and learned from the best directors, gleaning the secrets of their classic, elegant work. He understood cinema and with the 1975 hit Jaws, established himself as a not just a capable interpreter but an innovator of importance.

There is something wonderful about Spielberg’s films. They make us feel, beyond the high level of storytelling, the classic look and feel of the film and the story that there is hope for the world and for our understanding of each other.

His strong suit is profound humanity, as exemplified in, among other films, E.T., The Color Purple, Schindler’s List, Amistad and now Bridge of Spies.

Together with his longtime friend and star Tom Hanks, he recreates the Cold War era in New York, during which anti-Soviet sentiment runs high as East West tensions.  The fact-based Bridge of Spies is a story of grace in peril.

Hanks play James Donovan, an insurance lawyer tasked with defending a man of mysterious origins suspected of being a Soviet spy and living in Manhattan.  Rudolph Abel (Mark Rylance in a stunning and restrained performance) is tight-lipped and wise enough to know his chances of winning his freedom are slim to none.

Donovan’s family is harassed and their home attacked because he is defending an “enemy of the US”.  He doesn’t cave or resort to tough guy measures, instead, he moves forward with careful consideration, knowing he is despised, because Abel’s right to a just trial trumps all other considerations.

Abel calls Donovan Standing Man, a name he learned as a child as his family was being victimised by Russian soldiers. It’s a pivotal theme as it encourages and mirrors Donovan’s senses of purpose.  Abel says he’s ready to die, but he spurs him on.

Tom Hanks’ warmth of character and understanding of human nature come through in the part of Donovan and we’re reminded why he is arguably the most loved actor of his generation.  We can trust him with the big issues and the small moments.

As a lawyer in a tough spot, he never wavers. His dedication to helping Abel is a healing theme and when the chips are down, down, down, he never loses his faith in doing the right thing.

The action moves from New York to Berlin when the plot thickens. Spielberg creates an unforgettable moment in history as the Berlin Wall goes up. The harsh realities of that time and place are unimaginable now as politics divided families and ruinous adjustments made.

Bridge of Spies a story of political brinksmanship played out in a time and place when the world was a little mad with fear.  But a man put it all on the line to help another and if you ask me, it’s a great moment.

It is based on actual events.  It’s entertaining, brilliant and celebrates the courage it takes to do what’s right especially when it seems impossible.