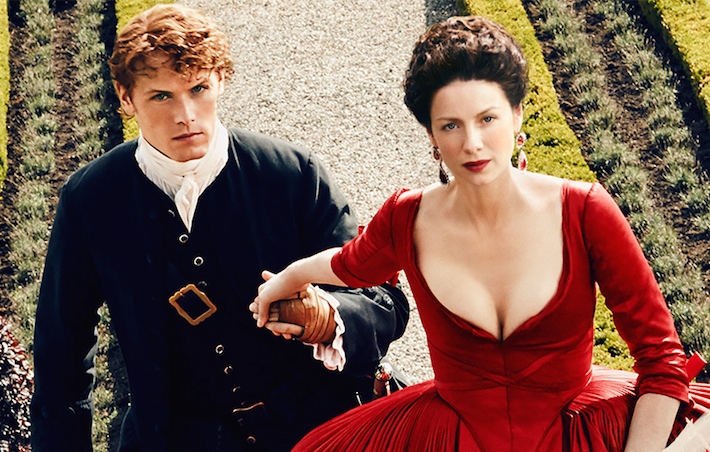 Caitriona (pronounced Katrina) Balfe rocketed onto the world TV stage last year in the ground-breaking Starz/Showcase series Outlander.  She plays a doctor tending to the war injured in London in 1945.  An injury somehow sends her hurtling back in time to the 17th century, dropped into the middle of a brewing uprising.  She manages to create a life for herself thinking she would remain there and never see her 1945 husband again.  She meets a charming solider Jamie Fraser (Sam Heughan) and falls madly in love and marries him. The show’s renowned for its authenticity, incredible settings and costuming and for Claire and Jamie’s sex scenes.  We spoke with Balfe in Toronto on the eve of the Season Two premiere.

This series has so much – history, time travel wonderful backdrops, politics, and sex but would be nothing without the human connection. How do you see Claire as laid bare human being?

Claire is such a vital human being, she loves passionately, lives and fights passionately and has a passion for healing and connection with people.  She’s a force of nature.  Playing her is such a gift and a thrill because the range of what I get to go through especially in Season Two is amazing. The connection to both the men in her life is so complex and the minute you feel like it’s one thing, it changes.  Her relationship with Jamie is just so beautiful but it’s also imperfect and that’s what’s so great.

We get interesting peeks into men’s behaviour at the time. Jamie and Murtagh hang out at the brothel, it’s accepted, things are done we would frown upon but was that the way it was then?

It’s interesting because there was a worry among some people having Jamie spend so much time at the brothel would anger some female fans and who think he’s just so perfect.  But it’s important to show he’s a man of that time and also that Claire trusts him and their bond is so strong that she’s fine with that.  She knows where his heart is and where his home is which is fine with her. Obviously sometimes it gets complicated and we’ll see as the season progresses that she also has a line and a boundary and once he crosses that line she’ll let him know about it, but in that way it feels like a modern relationship.

You don’t become a monk the minute you get married, you don’t stop having flirtations and desires, it’s about choosing your actions carefully.  We’ve always said this show is about a marriage. They didn’t have a real relationship until hey got married and now we watch them try to figure out how to make that work.  It’s a beautiful examination of that.

Even though Claire and Jamie live as aristocrats in France Claire takes a job as a doctor at a charity hospital.  Isn’t that unusual for the time?

Claire isn’t interest in sitting in the dayroom with ladies, hanging out and gossiping. She has a passion for that interaction with people and being able to give her gift to people which is to heal and nurse. Most people in the medical profession will tell you it’s a calling so her frustration we see in the first few episodes is building and building because she feels she have so outlet for her expression of self.  Once she finds her place there she instantly has her purpose back and it creates tension with Jaime and what was wonderful about it was we were seeing it’s a very common problem.  An expectant mother who wants to work and the implication that has within their relationship.  Jamie is in a place when he’s venting his frustrations out on her and in another time he would have been more accepting a and supportive but to watch him scold her for not caring about their child … as women we can’t just put our feet up and become baby factories the second we get pregnant. You still have to live your life and I thought it was a great thing to explore that motherhood and profession in that time.

Court life is rocky and rumours of dire things lying ahead have unsettled Claire and she feels isolated.  But she develops an ally.

Fabulous! The character is Master Raymond the apothecary is wonderful, vivid and beautifully playing by Dominque Pinon who I’ve seen in Delicatessen or Alien and Amelie and all those wonderful things. He’s wonderful and the minute you step into that pharmacy set it’s a mysterious box of wonders, those scenes were really fun to play for me and as Claire. He’s the counterpoint to Geillis Duncan in Season One.   Here is a person who instantly recognises like-mindedness about one another. It’s a lovely relationship that’s built.

I have the feeling he wouldn’t be terribly surprised if he knew Claire’s secret.

Yes, I have the feeling he’s got vision and he’s a very special man and as the season progresses we’ll see him play an important role in Claire’s life.

You’re in the court of King Louis XV for most of the season as Jaime is exiled from Scotland. The clothing and sets and every detail of the art design is so lavish, lots of money has gone into this so what is it like to be in that incredible world?

It’s amazing. Gary Steele does the most incredible job, people don’t realise we’re not shooting at a real place or all of the work and detail that goes into creating these sumptuous and amazing sets. They’re created out of nothing, in the space of a few months. You walk towards the set and from behind its all raw wood and scaffolding and the you step inside and your instantly transported into the most incredible Parisian apartment with parquet flooring and velvet paneling and gilded mirrors and its mid blowing, It really is We had a courtyard they created that had double doors to you studio so we could have horse drawn carriages coming in and out. It’s amazing until the horses decide to relieve themselves inside the studio and then it’s not so great!