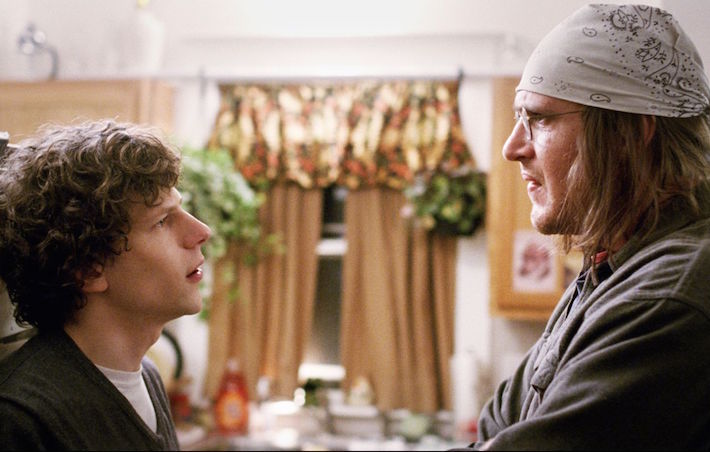 End of the Tour

It takes a special kind of moviegoer to watch a film about two guys talking. While there is some brief relief from a marathon five day conversation including a trip to the Mall of America, this is for word lovers. I’m one and was captivated by conversation in End of the Tour.

The story concerns two writers navigating discovery of one another for money and prestige, and traces their compliance and rebellion, discomfort and revelation. Why do they put themselves through this painful needling? Follow the money.

They would undertake the five day interview in which their real selves are revealed as well as the selves they think they’re projecting. Eisenberg is manipulative and subtle, and Segal is heart on the sleeve and vulnerable. It’s a deft career-changing dramatic performance for him.

Lipsky went out on a limb to get the assignment from Rolling Stone’s Jann Wenner, referred to by the familiar “Jann” although it’s unlikely Lipsky ever met the man.

Lipsky and his girlfriend admired Wallace’ ground-breaking novel Infinite Jest and manage to convince the magazine that doesn’t cover authors, to cover this one.

It’s all on the line. Lipsky has to shine and that means getting the real dirt on this enfant terrible of the literary world. Was Wallace a heroin addict, depressed, suicidal? People want to know, says “Jann’s” rep.

So back in Minnesota, Wallace and Lipsky dance warily through the stages of getting to know each other in Wallace’ tiny, messy and isolated house. Winter chill outside has nothing on the chill inside.

They don’t care for each other. They are creative rivals. It’s never explicitly mentioned but their furtive looks – and secret actions – speak volumes.

So naturally they create an emotional environment that teeters on collapse.  Grappling with big philosophical questions creates real tension but there’s a kind of primal purity to it.

The idealistic Wallace agreed to the interview but he’s tortured by the possibility that doing the interview for Rolling Stone is selling out.  He seems ashamed.

Still Lipsky’s reputation is on the line so he ramps up his manipulation of the lonely, unstable author.  He’s not as subtle as he’d hoped as he puts the screws to him.

Wallace sets down ever tougher rules about Lipsky’s coverage.  He’s banned from getting what he has been sent to get. Lipsky is frantic. But Wallace is finally sure that he can’t reveal too much but he can’t stop talking.

What begins as a nice quartet out on the town ends in jealousy rage and reprisal. Wallace feels betrayed and probably was, but Lipsky’s taking notes and pushing for a dramatic episode for the article.  Which is stronger?

At times the atmosphere is ugly but laughter and connection happen. The ebb and flow of their rivalry keeps it riveting.

They are strangers who are natural enemies and too smart for one another, and begin an intellectual battle to survive.

The script is terrific, the performances are passionate and deep and it feels like an emotional thriller.  There is a constant quiet sense of threat, reflected in the presence of Wallace’s big dogs.  But from whom does he need protection?

« The Copyright Hack – BEWARE! by Vivek Raj Shivhare | VOOFA.ca
Get Free Passes to see LEARNING TO DRIVE plus an OCTOBER GALE DVD! »