Antonio Banderas plays Salvador, a version of his longtime collaborator, Spanish filmmaker Pedro Almodóvar in the exquisite Pain and Glory. He plays the adult version of a traumatised boy who went on to find release and expression as a successful film director.  career is at a standstill, but he is asked to appear at the 30th anniversary celebration of his greatest hit but finds the prospect emotionally taxing.

It launches him on an odyssey of memory and regrets – his pain and glory –  as he ponders his future.  Banderas and Almodóvar have created a powerful, intimate and often mesmerizing portrait. I spoke with Banderas in Toronto where he presented the film as part of TIFF.

Antonio, you play a figure similar to writer-director Pedro Almodóvar in Pain and Glory. How did you understand it in terms of being his muse and it being about him? Is that true?

Well, not so much in that aspect, but in terms of – we’ve been friends for almost forty years. I know him and I knew about many of the aspects expressed in the movie. Not all of them even though we’ve been friends for four decades, Pedro is a very private person. And also, our friendship has certain boundaries.

I was always very respectful with his personal life. We’ve got our own universe and we communicate every while – it has to do with movies but also with friendship. So, it was surprising to me when I received the script to see in the script things that I didn’t know.

Yes, it became kind of a confessional thing for him in a movie that is pretty much about coming to terms with yourself in a very specific moment of his life. I suppose that it has to do with age, and it has to do with your own reflections about where am I going and coming from, and the need to say these things. 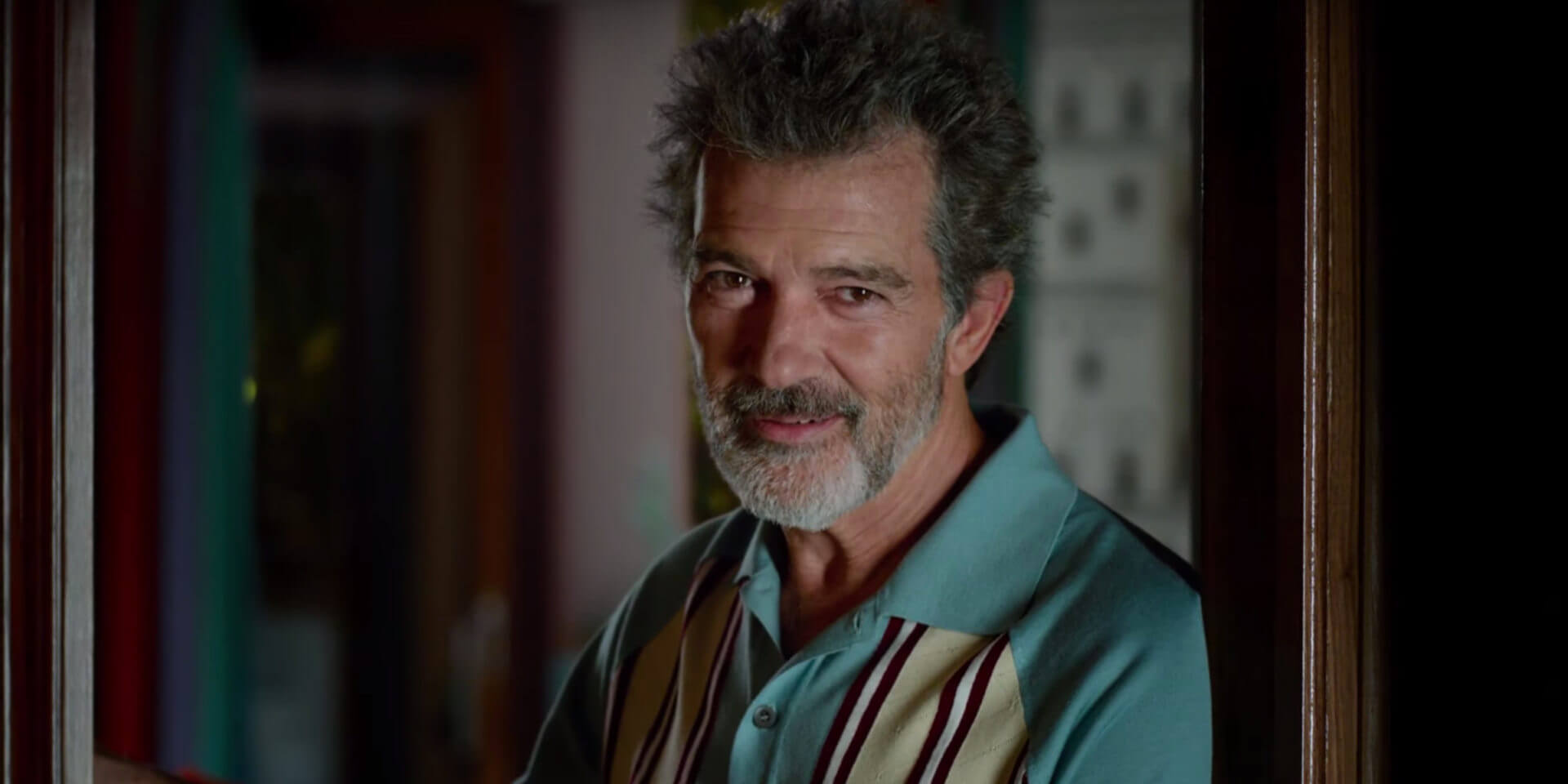 Antonio Banderas in ‘Pain and Glory’

That’s a huge responsibility for you.

Yes, at the beginning it was actually satisfaction when I read the script – it was satisfaction that he had this trust and confidence with me, to give me the possibility of playing him – his alter ego.

And then immediately that went to panic. Because I said woah, woah, I’m going to be directed by my character.  And that is a very weird thing that I never experienced before. But it went very well!

It was very blessing. And I suppose that has to do with an attitude on both sides. In my case, I think it started like nine years ago when I went to do The Skin I Live In, which is another movie I did with him.

It was after 22 years that we didn’t work together. And so, I came with all my new tools from America. And I just presented him – look, I’m a different actor now and I learned all of these things and I have all of these tools that I can use in order to play with my voice, with the use of my body and he says, okay, okay. So, we start rehearsing and after a week of rehearsals he says, “you know these new tools you’ve learned in America? I can not use that for my movie.”

And I was like, oh my god. So it kind of confronted him in a way. We never lost our friendship but it was tense, you know, shooting The Skin I Live In. But when I saw the movie here in Toronto – in the film festival in Toronto – I realized he was capable to just bring out a character that I didn’t even know I had.

So, that opened that reflection in me about being humble, and about listening more, and about trust. And trust especially those people that love you and (who are) being recognized for being very good.  So, I was thinking – am I going to have another opportunity?

So, when he sent me the script, it was beautiful because I saw the opportunity, so I called him and said, listen, I’m coming to you as a playing soldier, let’s just prepare this from scratch. And when I listen, I want to know why you want to do this movie, I want to know why you called me to play you. And so, we started from there and little by little, we were sewing this complicated story that at the same time is very simple.

There are scenes when the camera just rests on your face –a lot of them, long sequences and that emotion is right there and so powerful. Gives me shivers just thinking about them, and the vulnerability of this alpha male.

The character gave me the possibility to express more. When the character performs in silence, when he listens and then when he’s verbalizing whatever is happening to him, I tried to do a character that was not manipulating the audience emotionally.

It was very important for me to be transparent, in a way, to send an invitation. Because you invite the audience to come with you and they can actually be part of you in the movie.

If you determine a character and you just give him more boundaries, it may be impossible for the audience to identify with him – so they just get out of the game. And it was very important for us to invite them to come and travel with us emotionally. In the movie – even if it’s a story of your life, it’s going to be different – but everybody has pains and glories.

And everybody travels through life with greatness and miseries. And everybody has the opportunity to look back, to come to terms with themselves and to reconcile with the past. Everybody understands that all around the world. And so we wanted to do a movie that went there without getting too busy in front of the camera. It wouldn’t have allowed people to be in it.

So well said.  Thank you so much!

« Shock of Shocks! I Took A Few Days Off and Missed Most of This Week’s Films!  So, Let Me Present a Two Night Only Film Event, a Searing Brit Noir to Stream, Whoopi’s YTV Short, a Vital Film Festival Focussing on Our Planet, Various Monsters, and a Clip Heavy Round-Up of Hallowe’en Film, TV and Streaming Opps
The Impossible Brilliance of Bong Joon-Ho’s Parasite, Portrait of a Thirty-Year Struggle for Justice in a High-Profile Church Child Abuse Case, Greener Grass, a Deeply Zany Suburban Satire That’s Nothing but Awesome, Helen Mirren Tackles Catherine the Great Two Ways, a Worthy UK Noir and the 20th imagineNATIVE Film + Media Arts Festival »