Sam Elliott shines brightly in The Hero. It’s a powerful, intimate story of a onetime huge movie star who has been left behind by the industry. Reduced from a major cowboy star to a voice over artist shilling barbeque sauce, he believes his career is over; it’s been his entire raison d’être and he’s lost. Out of the blue, he learns he’s being given a Lifetime Achievement Award by a Western Appreciation and Preservation Guild and that’s when he really starts to reflect on his life and regrets. In a crazy twist, his self-deprecating acceptance speech goes viral and Hollywood comes calling and the good times are once again within reach. Elliott shapes the character of Lee beautifully, subtly and with heart and often in silence. It’s a masterful performance. We spoke with Elliott from his vacation home in Oregon. 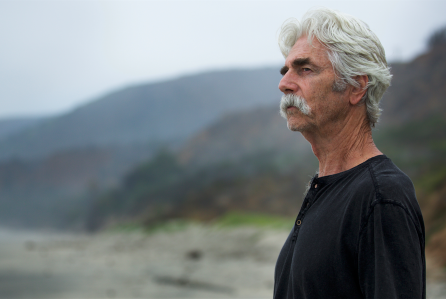 The Hero is a beautiful film, and yours is a beautiful performance. Congratulations, it’s a role of a lifetime. Did it seem special when you read the script?

I saw it then and still feel it now. If my career comes to an end tomorrow, I feel like I have done what I wanted to do. And this film was written by a 33 year old man from Brooklyn! Writer director Brett Haley and I got to know each other doing p.r. for I’ll See you in My Dreams, a film starring Blythe Danner; I had a supporting role. We got to know each other very well traveling around together and he decided to write this film for me. It’s a great tale and great characters.

Your popularity is off the charts and you’re in no danger of your career ending. What did you relate to in Lee?

I think every actor can recognise some kind of truth in Lee but it’s not an easy game. It’s a strange pursuit; some people think it’s a very frivolous pursuit. For those of us who get bit by the business at a young age can find that it’s painful. Some people are better equipped to deal with it. Others can be overwhelmed, and Lee pursued it at all costs, his family, his health, his well-being. There’s people who get really easily flummoxed by all this and they buy into what people write about them and tell them and what people are saying about them. When you start believing how wonderful you are, well that can be trouble. It’s a heady trip to take. Keeping perspective on this one thing properly is not an easy task.

Did you experience that at any time?

No, I didn’t. If I had this film early in my career and people were saying what they’re saying now, it would be more than I would want it to be. At this point I truly try to keep it in perspective, really. When I read things they say but I don’t read a lot of it. I look at reviews and criticisms as someone else’ perspective. Actors have a tough road, it’s a real thing. I get it, but I never went down that road myself. And people with a sense of entitlement, getting everything they want is a deep hole to get out of.

I have to address this. Women love you.

It’s hard for me to quantify it. It’s interesting that whoever it is who follows me or likes me is because of those images I’ve portrayed on screen. That’s not me, that’s what I do for a living. That said, people are writing that in The Hero, there’s Sam playing himself again! 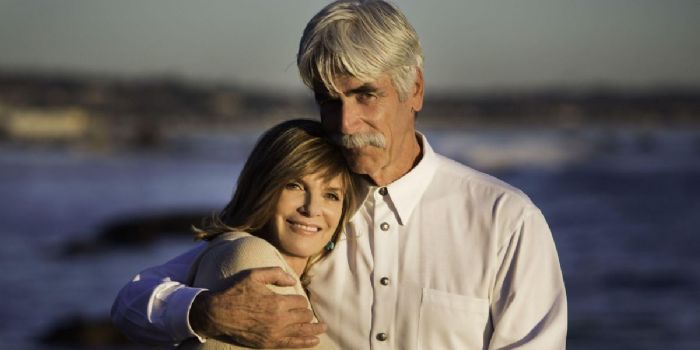 I was so happy to see your wife, Katharine Ross in the film. She plays your ex-wife! What was it like working together again?

It’s always wonderful. We love working together; I think this is the sixth time. It’s a brief encounter in this on. But it was weird playing exes. We always enjoy it. She did us a favour by joining us.

Laura Prepon is your much younger love interest. How was that collaboration?

I knew her from afar only. We never crossed paths, but I saw her That 70’s Show. I was never a fan of the show and only saw it when I was swimming around the TV channels. I’d see that redhead and I knew she had something going on, in the surroundings of those clowns.

When she shows up in the opening sequence where Nick and Lee and are smoking dope, we shot that the first day. She said hi and I was done. She couldn’t have been better cast. Everyone was the first choice; there was no list of actors. Everybody said yes and everybody was incredible.

Laura is so smart and so beautiful and giving as an actor. She likes to do good work. She’s astounding, devastating. I’m thrilled for her. She’s about to have a baby. I saw her in New York a few weeks ago and she looked like this Earth Mother. She has this incredible performance and now a baby. Just thrilled for her.

There are sequences at the front and the end of the film of Lee recording a barbeque sauce. And because of what has happens in the film, we see them with completely different emotions.

The commercial wasn’t scripted at the end of the film. Brett also edits his films. He decided he would bookend the film so he took a piece out of the first chunk and put it at the end and it is brilliant. Yes they are different. The one at the end speaks of hope. “Do it one more time.”

Compare the experience of working in huge budget sci fi film and an intimate film. You’ve done it all.

If I had my druthers independent films would be my favorite films to do. You are unencumbered by the system. You’re always fighting for time and money, that’s a constant that never changes but you’re not serving the studio. It’s not some sequel you have to be true to and there aren’t a lot of people involved except those who are part of the creative process. You can be focused on the work.

The Hero was shot in 18 days on a budget of $1.2 or $1.4M. There’s nothing like the energy that comes out of working with a bunch of people moving in the same direction. There are no attitudes, no nothing. The main goal is to make a good film. When it works, when it happens that’s the great reward. It’s the work. It’s not the budget or the salary, it’s the work.

Just out of the blue – what is your favourite film?

I guess from my childhood, John Ford’s How Green Was My Valley with John Wayne. It broke my heart every time. I like contemporary films but the ones from the past I love. It’s because I went to those films as a kid that I became an actor.