Isabelle Huppert is Frankie, a famous French actress, as life imitates art, who brings her family together, some against their will, for a last vacation. She’s dying of cancer but even that can’t soften the hearts of some family members who feel forced, even in the glorious environment of Sintra, Portugal.  There’s a lot of hidden animosity under those sunny skies.  And much of the film is wordless as characters reflect on the gathering and their responses. Writer-director Ira Sachs spoke with us about Frankie.

Anne Brodie: Ira. Isabelle’s character Frankie is central to everything that happens. She’s the core of this family, she’s the cause of the meeting in Sintra, she makes it happen when many resent her. The mighty Isabelle Huppert can carry that off.  And she doesn’t really say that much.

Ira Sachs: When we started talking about this script, I said the interesting thing about the role is that she’s present even when she’s absent. She’s always there. And then she gets the title. You know, I think Isabelle is so great with both words and silence. I mean, there are several scenes in the film with no dialogue, but she can tell the story with her face.  I asked her to be as simple as possible.  I asked her to just trust the words and trust the response and trust the landscape. And so, there is an essence, I think, that is very much Isabelle that comes through the film and maybe a different way than in some of her other work where she’s been asked to be bigger. So, there was an intimacy I had with her as a person that I wanted the film to contain.

Anne Brodie: There are moments when she’s just looking down and she’s thinking – and you don’t see that a lot. It’s a beat for us to reflect with her and I loved that. It’s a beautiful thing.

Ira Sachs: I think that’s what the camera can do so beautifully is capture the unspoken. And, you know, I don’t rehearse with my actors before we start shooting.  So, what I’m looking for is the moment that can’t be repeated. 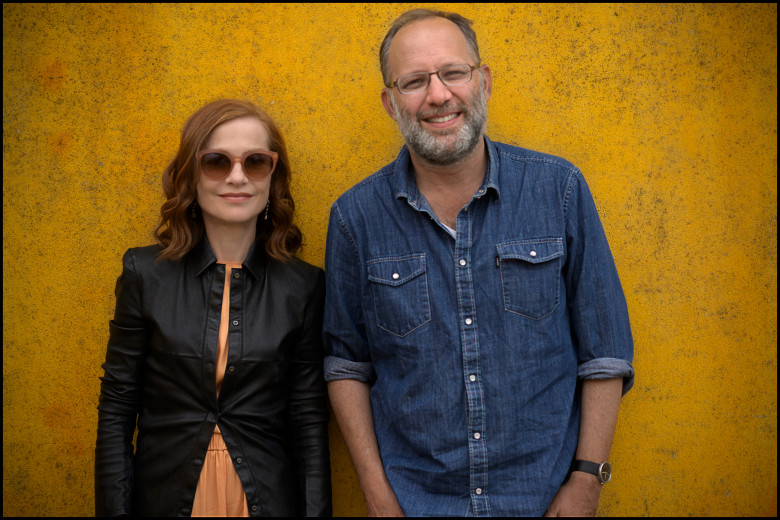 ISABELLE HUPPERT AND IRA SACHS BEHIND THE SCENES OF “FRANKIE”

Anne Brodie: And I’m thinking of the diving shot at the top. I mean, that’s a pretty amazing introduction to Frankie.

Ira Sachs: Yes. It was a long shot on purpose. It was a far shot. The film opens with Isabelle’s character taking a swim and taking her top off and being very free, which was important. From the first moment, she has a lot of glamour, it’s part of who she is. She plays an actress, a famous French actress, but not as famous as Isabelle Huppert. That’s always what we said is that Frankie’s a success, but she’s like a big TV star but she’s no Isabelle Huppert.

Anne Brodie: Being the focus of this family, she has a life and death situation that she’s dealing with, which is why she calls everybody together.  You felt a connection to that idea?

Ira Sachs: Yes. In the last five to 10 years, I’ve been closer to illness than I had been previously in my life. And I had a very good friend who had breast cancer and died at 50 and being with her during the last few years of her life and the last few weeks of her life, one of the things that I noticed is that everybody brings their own story to every moment.  You can’t leave the rest of your life behind.  Even in moments that seem profound and serious, which they are.  But it’s the contradictions which I think are very human. And for us, that meant contradictions in tone. There has also been a lot of laughter when people see the film. And I think that is something….

Ira Sachs: It’s recognition. And also, it’s, you know, I mean, I think Chekhov, Shakespeare, Rules of the Game – these are my inspirations. People who understand that it is in the contrast that something real is discovered.

Anne Brodie: And all of this activity that we’re witnessing takes place in one day. I kind of forgot that watching. That’s a remarkable feat.

Ira Sachs: Well I had seen maybe a decade ago, a film by Satyajit Ray called Kanchenjungha, which is a film about a family on a vacation in the Himalayan Mountains. It takes place in one day and it has nine stories. It begins in the morning, it ends in the late afternoon and I loved the film and I love the structure of the film. And I knew that I could maybe make a film with that same set of rules. For me, what that does is it creates a very theatrical film. It’s realistically acted, but it’s not a realistic story. You have nine different stories coming into play. It’s very concentrated. And I think that’s part of the fun of the movie, is that it’s sort of like real life, but through the gaze of artistry and film and theatre in a certain way.

Anne Brodie: Amazing. I just loved it.  Oddly enough, there have been several films about women with cancer this year. I’ve never seen that before – so many. Is this a tribute to your friend?

Ira Sachs: It is certainly a tribute to her. I think it’s also – I’m 53. I’m a middle-aged man and I think there is a sense – when I was young, my films were all about the difficulty of finding love. Now, the struggles that I have are different. You know, I’ve noticed, I watched a bunch of films by Ozu maybe five, six years ago and I got very involved with his work. And he’s always telling stories about families and in a way, he gives me permission to just keep making family films. But one of the things I’ve noticed since I watched Ozu, all my films are about three generations because in a way you can’t have a character without in some ways thinking of the people who come before and they come after like we’re all in context with three generations.

Anne Brodie: That is so true. And Sintra, Portugal is a beautiful place. You can go in certain forest areas and hide, you can be in wide-open spaces on hillsides at sunset. How important was that location for you?

Ira Sachs: I worked with a Brazilian co-writer, Mauricio Zacharias. His family is from Portugal and he recommended that we go look at Sintra when we decided to make this film about a family on a vacation. And when he mentioned Sintra, I remember that I had been there when I was 14 years old with my mother and my two sisters on a family vacation. And I had kept a diary and I had these pictures and I was like, okay, that’s interesting to me, but that’s not enough that we’re going to set it in Sintra. But when we went to visit and spent a good amount of time there, I felt extremely involved with the landscape and with the sea and with the forest and these different parts of Sintra that I really felt I could tell a story in. I didn’t make a film about Portugal, I made a film about the landscape of Sintra. And I felt comfortable doing that. We built what you just described, meaning it’s a fiction. Clearly, all those things are really there but we constructed a story around three levels: the town, the magical forest and the mountaintop. And you feel that sense of everyone moving towards the mountaintop. But that’s not how the city is constructed. You know, that’s part of the fiction of the film.

Anne Brodie: It’s great. Thank you so much.

« The Irishman Crowns a Master Director’s Career, TIFF Pays Him Tribute, An All-Star WWII Film Midway Raises the Bar, Isabelle Huppert Alert!! And Disney’s Big Launch!
Matt Damon and Christian Bale Take the Wheel and the Heat in a Breathtaking Racing Film, Nature Is Just as Exciting for One Small Creature, Alicia Vikander’s Tokyo Noir, A Chinese Noir, Season Three of The Crown – at Last! And Who’s on First? What a Time to Be Alive. »