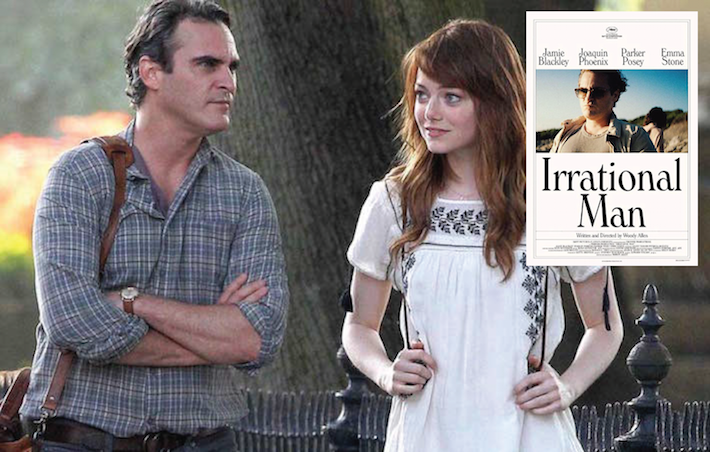 Written and directed by Woody Allen

Woody Allen fans have reason to celebrate Irrational Man, his strongest film in years.  Allen’s contemporary versions of the romantic crime comedies of Nick and Nora Charles have been a mixed bag but here he is, aiming high and scoring.

Allen’s body of work in recent years has seen its fair share of sophisticated and comic murder mysteries in which leading romantic couples attempt to solve or deal with wilful crime. It’s dicey territory and crammed with philosophical and existential questions that his characters raise, but Allen makes it all so enjoyable.

Part of the magic of Irrational Man is Allen’s casting.  Emma Stone shines in her second Allen film as a gifted university student who falls in love with her professor, an unstable, brooding Byronic anti-hero played by Joaquin Phoenix. They’re talented, appealing and smart in ways that set them apart from the Hollywood hordes.

Stone is Jill, a wide-eyed student open to all life has to offer and keen to drink it all in.  Her youthful naïveté and poetic romantic yearnings find their target in the professor.  Abe is played by Phoenix and he’s in a slump, dragging around a mysterious past, the reputation as a lady killer and he’s an unapologetic booze hound.

Abe resists Jill’s advances claiming he’s unfit for her but she persists. He’s not especially moved by her attentions because he already has a casual sex partner in a university colleague Rita (Parker Posey) and that’s not lifting his mood.  He and Jill begin building an intimate friendship but he continues to resist her and to sleep with Rita.

One afternoon Abe overhears a conversation in a diner. A woman is talking about a judge who will take away her child because he’s a friend of her husband’s.  Abe decides to kill the judge.

He thinks he’ll get away with it because there is no reason to connect him to the woman or the judge. Having a project breathes new life into him. Suddenly he is following his prey learning his habits and patterns and his life has meaning!  And now he can romance Jill.

It’s an amusing and skewed situation played for laughs even though the horror of murder is real.  It’s fun watching Abe sneak around the Main Street in pursuit of his rejuvenating compulsion, shot wide to underline the ridiculousness of it all.

He tries to keep things quiet but failed to take into account Jill’s intuitive smarts and logical thinking.  Will his true character wipe the stardust from her eyes?

The story is beautifully choreographed and fits together so well and that’s a pleasure.  And with the heady mix of comedy and horror and romance, it’s an oddball and a hell of a good time.

Allen remains an important filmmaker at age 80 with 56 films to his credit, charging forward with new, fresh ideas.  Imagination and cinematic mastery are the foundations of his films, and despite his notoriously gloomy outlook his work is as vigorous and fresh as ever.