Acorn TV and BBC present a radical new adaptation of One of Christie’s Most Loved Mysteries on www.acorn.tv  premiering Mon. Jan. 30 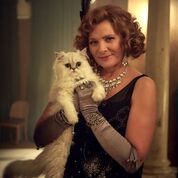 Kim Cattrall, fresh off raves for her HBO series Sensitive Skin, a series she championed for more than a decade, launches another of her projects.  Cattrall is Emily French a wealthy older woman looking for young male company in a sizzling new adaptation of Agatha Christie’s murder mystery The Witness for the Prosecution.  French is brutally murdered and her young paid lover Leonard Vole (Billy Howle) is arrested, setting off a chain of deceptions, ruined reputations and suspicion.  Vole’s wife Romaine (Andrea Riseborough) a showgirl also falls under suspicion.  But what about French’s obsessed maid? Cattrall gives French a powerful presence unseen in earlier versions, she’s financially and spiritually independent with sexual appetites; she’s strong yet vulnerable and has great joie de vivre.  It’s an unforgettable and heady mix that breaks the mould for Christie’s women.  We spoke with Cattrall on this, the edgiest adaptation of The Witness for the Prosecution.

Talk about bloody murder – I’ll never forget the cat licking her paws in the aftermath of Emily French’s brutal murder!

It was horrible, wasn’t it?

This iteration of the Agatha Christie story is absolutely unique.  It goes to the roots of human nature and there is a heightened sense of dread not present in the earlier ones.

Absolutely.  I think that Sarah Phelps is a good writer and what she did in updating it really enhanced a mood that was not just in 1923 but today, the uncertainty that we’re feeling now. It reverberates and vibrates in a very succinct way.

I have a history with The Witness for the Prosecution.  I was supposed to do a Broadway show based on it.  Christie wrote the novella and then a play and it was in London’s West End and in New York for a time.  Then it was refashioned as a film with Charles Laughton and Elsa Lanchester.  In all the incarnations, Romaine (Christine in some adaptations) was an older woman to Leonard Vole.

She was Marlene Dietrich in the 1957 film, and Tyrone Power was Leonard Vole, an American with a German lover.  Dietrich was a German woman who moved to England in the fifties and was an actress. There was great hatred towards Germans in Europe then.

People think that Agatha Christie as this whodunit writer, fun and disposable fiction. But looking at her now, the characters she lays out for women are highly complex and the plotline is very clearly drawn. It has a strong foundation and construct like the characters and outcome.

It is strong enough to adapt.  You can infuse it with different societies and values of the time. It still packs a punch and has people on the edge of their seats.  It is a statement to Agatha Christie that her work can be transposed and revisited and reinvented.

Do you think Christie would have been shocked by this latest version? 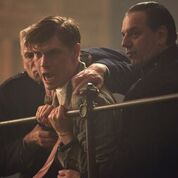 I hope not. Maybe it’s a good thing to shock Agatha Christie. I know her estate is protective but I think they were happy with And Then There Were None (2015) and now The Witness for the Prosecution. They read the scripts and I think that if it’s well done, you can’t argue with that. Even if the adaptation isn’t verbatim, it’s the feeling, the chilling feeling and it’s still there.  What I love about Agatha Christie is how complicated her women were and are. That’s her.

You have created this incredible, memorable character.  Emily French is unique. She’s elegant, wealthy, and highly sexual, egotistical and yet deeply vulnerable.

That was what excited me when David Mamet offered me Emily French.  I really wanted to play Romaine and did in the first involvement in a workshop in New York.  It was four years ago with Roger Rees. I loved it but the producers got cold feet at the last minute.

But the workshop had been a success so I took the script to England to do onstage and play this great character.  We got in touch with the Agatha Christie estate and thought we could work with them on a TV version that they’d given David Mamet, with Sarah Phelps as the writer.

So you were playing Emily French. 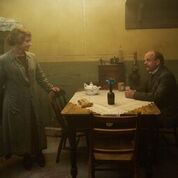 The character of Romaine was in her early 30’s and I am not in my early thirties but they said we actually have another role.  Emily French in the original play and the 1957 film was this plump, older gadabout who enjoys sex.

I’m thinking this is going to be the same kind of Samantha-like character but it was so well written that you could do something completely different and show the qualities you have in mind for her.

The vulnerability of this young spirit prisoner of the time she was born. She was a suffragette and an emancipated woman.  She goes out at night and feels she’s like a debutante.

And you wonder how it must feel for her to have to pay five pounds a week for a young man’s attentions, to have to ask for that.

She’s a very complex character; you see the jaded woman, the lonely girl, young deb full of young love, addicted to being needed and wanted and craving company. And you ask why.  The there is this punitive and possessive maid, played by Monica Dolan.

Emily’s twenties wardrobe, as a wealthy woman is stunning, jewelled fabrics, satin shoes and silk stockings.  Did it aid you in your performance?

I think it always does for me. Doing theatre I tend to modern things. I don’t dress like the characters, but it does enhance the experience.  Julian Jarrold, our director was very collaborative and wanted to know how it felt.

My idea was to make her a suffragette, but unfortunately we couldn’t find any hats because I wanted to wear the suffragette pin, someone who would vote in 1922.   The only women who could vote then had to have property and means and she had both.

I think of her as being one of the first women to vote. And then that was over, and she thinks she’s done enough but now what?   There were no men forthcoming – a lot were lost in WWI – and she was suspicious of men her own age.

I was filled with compassion for her because she was trapped and it was that generation.  In time she would have flowered in her own way.

You’ve had a truly diverse and interesting career so far. You’ve picked interesting and significant roles across the mediums, genres and characters.

I think luck has a lot to do with it.  It’s been a long time since I went through conventional methods of getting the work I wanted.  Like Sensitive Skin on HBO which took me ten years to get it made.

It was always in the back of my mind. I’m interested in seeing characters in all mediums in a new light, with more dimensions and unrestrained. It starts with my understanding it. I don’t pay the victim.  Emily is not the victim; she is so much more than that.