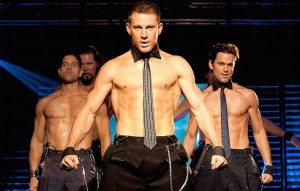 Let’s start with the good stuff.  Let’s start with exuberance, showmanship, brotherly love and non-sexual intimacy between a band of male strippers and with the women they meet on the road to the Final Gig.  Theirs is a female-positive attitude and their steamy shows are little more than innocent suggestions that frame but don’t parody or result in sex. And Magic Mike XXL succeeds in giving a whale of a show, a muscular, acrobatic dance-a-thon sprung from sex in a safe and protected environment culminating with a feel good vibe.  No harm in that.

It’s not my job as a film reviewer to wag my finger at sexism in stripping, male or female, the moral conundrum of doing your job that you actually like while having dollar bills tossed at you and spraying women’s crotches with whipped cream.

And then there is the matter of lifestyle and choice. These characters are naughty and provocative and damn silly at times if you want to nit-pick the obvious.  But how is it sexist?  What happens in MMXXL and the positions people find themselves inhabiting they choose. The film’s pro-woman and pro-bro and that’s a big deal.

However, there’s no denying the first hour inside the stripmoboile / artisanal ice cream mobile / home is pretty gruesome as we’re dragged through all the “male entertainers”’ personal stories.  There’s trash talk about Dallas who abandoned the troupe, Magic Mike’s career success as a furniture designer, and more agony tales that stretch the patience.

But mostly there is trepidation about the upcoming show at the Stripper’s Convention. The troupe is frankly in a rut, new material, new attitude, stat. A visit to a strip hotel catering to women run by (Jada Pinkett Smith) rejuvenates them.  The house performers including Danny Glover have unique ways of seducing paying customers, just a sweet song or like Michael Strahan, a down and dirty – but chaste – moment on a table.

A gaggle of wealthy cougars led by a drawling Andie McDowell gives them a car, money and entrée when they need it most.  It’s in payment for a night of flirtation.  Suddenly the boys are ready with new attitudes, new characters inspired by their own personas, and it’s on.  The dance numbers are terrific and Smith’s mistress of ceremonies is a rousing cheerleader with a seen-it-all-but-still-cool vibe.

Certainly there are a zillion sarcastic cracks to be made about male strippers on one last run and the women who pay them.  The film will polarise audiences but seriously there are worse things in life than a movie about stripping.