Netflix’ Marriage Story, written and directed by Noah Baumbach based on his own and others’ true divorce experiences is a searing portrait of the crash and burn of love. Scarlett Johansson and Adam Driver who no longer recognise who they’ve become in a bitter bi-coastal war that threatens their sense of stability and love and relationships with their young son. We’re introduced to them in happier times, in a letter form flashback, and gradually Baumbach unravels them at a crossroads, revealing ugly and aspects of themselves they hadn’t seen before. Then come the lawyers, played by Laura Dern and Alan Alda, bringing strange new pressures to the naive couple. Marriage Story is harsh, explosive, beautiful and provocative in the hands of two great actors, cast and crew.  Baumbach, Driver, Dern and Alda met with us in New York.

Noah Baumbach, the film is shot with a combination of open space and sudden closeups and other ways of making psychological points for intimacy and impact.

NOAH BAUMBACH: This movie is so much about performance and I have nothing to hide behind. The actors are my special effect, it’s like they’re everything for this movie. And when you have actors like this, you have the luxury to let them exist in the space. The space is also a part of the movie as it’s referenced throughout the space in Los Angeles.  But also, the space between people.  And I found it was a way to visually, on one hand, to let the actors really have their own rhythm and momentum.  We rehearsed these scenes exhaustively, and they’re all blocked out.  So, when you do cut, or when you go into closeup after being in the room and letting them breathe, and the mic is being selective at what it thinks you want to hear and don’t want to hear, it has another meaning I find.  If you’re cutting throughout a scene, that’s fine. It might be right for some scenes.  But then I find it has a whole new impact.

I always think of, I remember watching Vertigo, the Hitchcock movie. And it’s early on in the movie and Jimmy Stewart he’s trying to prove to Midge, his friend, that he’s fine. He’s fine with the vertigo and he’s going up and down. He’s showing her up and down, flaunting it on a stepstool, but then he’s near a window and he looks out the window, and of course, he gets vertigo. And they cut to closeup. And you realize it’s the first time there’s been a close up in the whole movie and it blows your mind. And it’s just a close-up. And when you have these actors in these spaces and this internal life that they’re bringing, it’s one of those things where a close up can feel like the most interesting greatest shot in a movie ever.  And you know, it’s just somebody’s face. 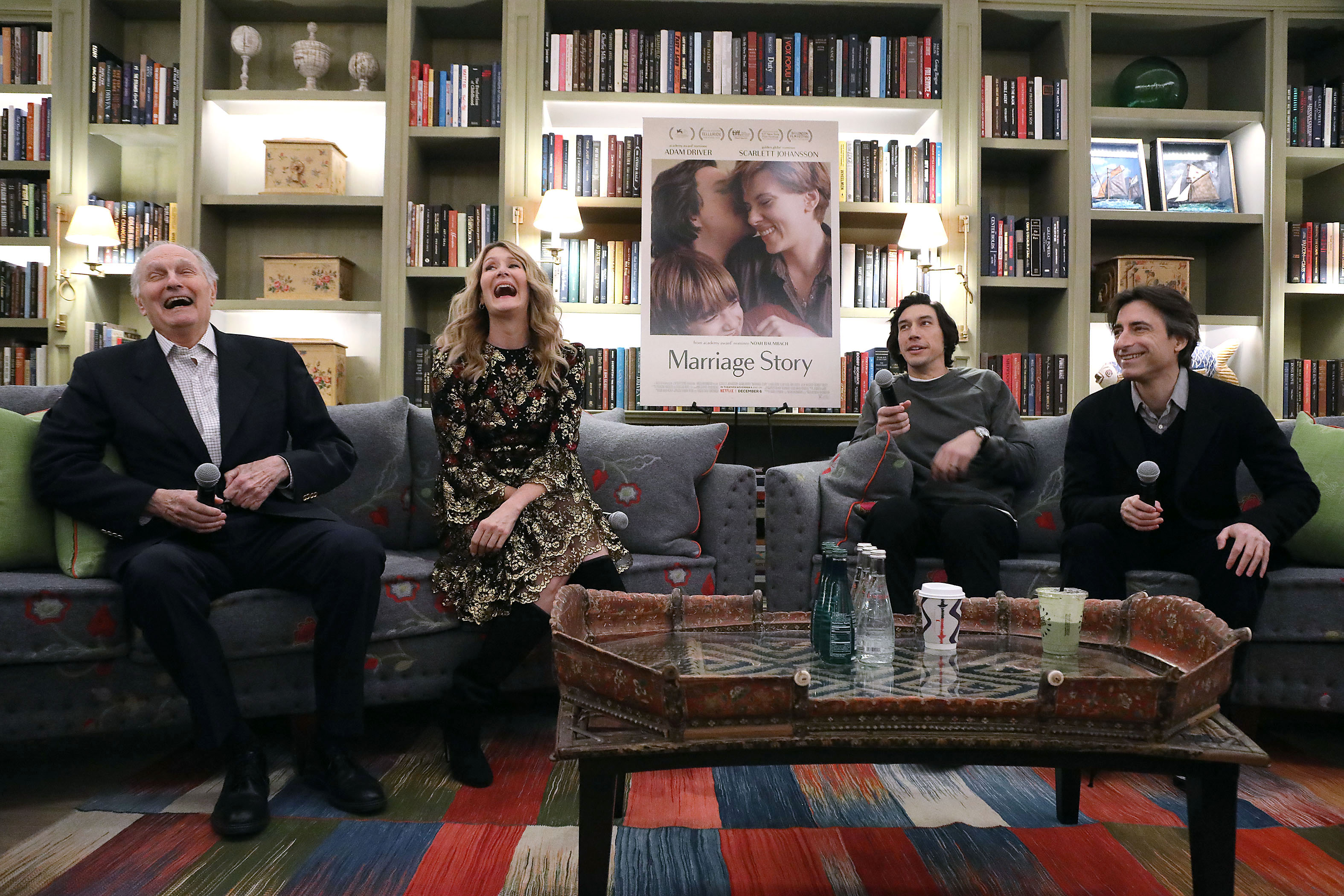 Adam, those shocking things your character said to Scarlett in anger,  I wish you were dead. So, many of us who have gone through breakups have had that moment and recognise it.

ADAM DRIVER: Yeah.  It was intense. We shot it over the course of two days. We realized that on the second day, we couldn’t just jump in the end of it. We kind of had to start from the beginning. So, every time we did the scene, we did it from the start all the way to the finish.  And it felt very much like theatre doing it that way, where Noah is in our schedule today, so he gives us a lot of takes, so it’s a lot of opportunities to try different things within the boundaries of the languages.  The language and the blocking, so that was incredibly freeing. With this, I think that all of the best way I can describe it is that there are always scenes in a movie where you dread in the schedule. And they always seem like they’re too soon for one reason or another if it’s physically exhausting or emotionally exhausting. And they all seem too soon in the schedule. And every scene in this movie kind of felt that way to me.  Even ones that seemed pretty innocuous, it always took on a new meaning when you were with great actors or you’re saying the language and having to mean it out loud. It obviously just takes over. So that was really difficult, but more just because it was longer.  It was 10 or 11 pages.  I can’t remember how.  But they all kind of felt like –Halloween was emotional, reading the letter was emotional, but those were just shorter scenes. But it was more exhausting. But you’re not really thinking about it. You’re not having like a –I wasn’t analytical when we were doing it. That’s the thing that I like.  There are conscious decisions that you’ve made and then there’s the unconscious that you have to kind of let go when you’re shooting it. So, it didn’t really hit me until later when it’s over. I don’t think even the movie doesn’t really hit you until later when it’s over, people ask you about it. Then suddenly, you’re forced to be analytical about it in a way that you’re not when you’re making it. 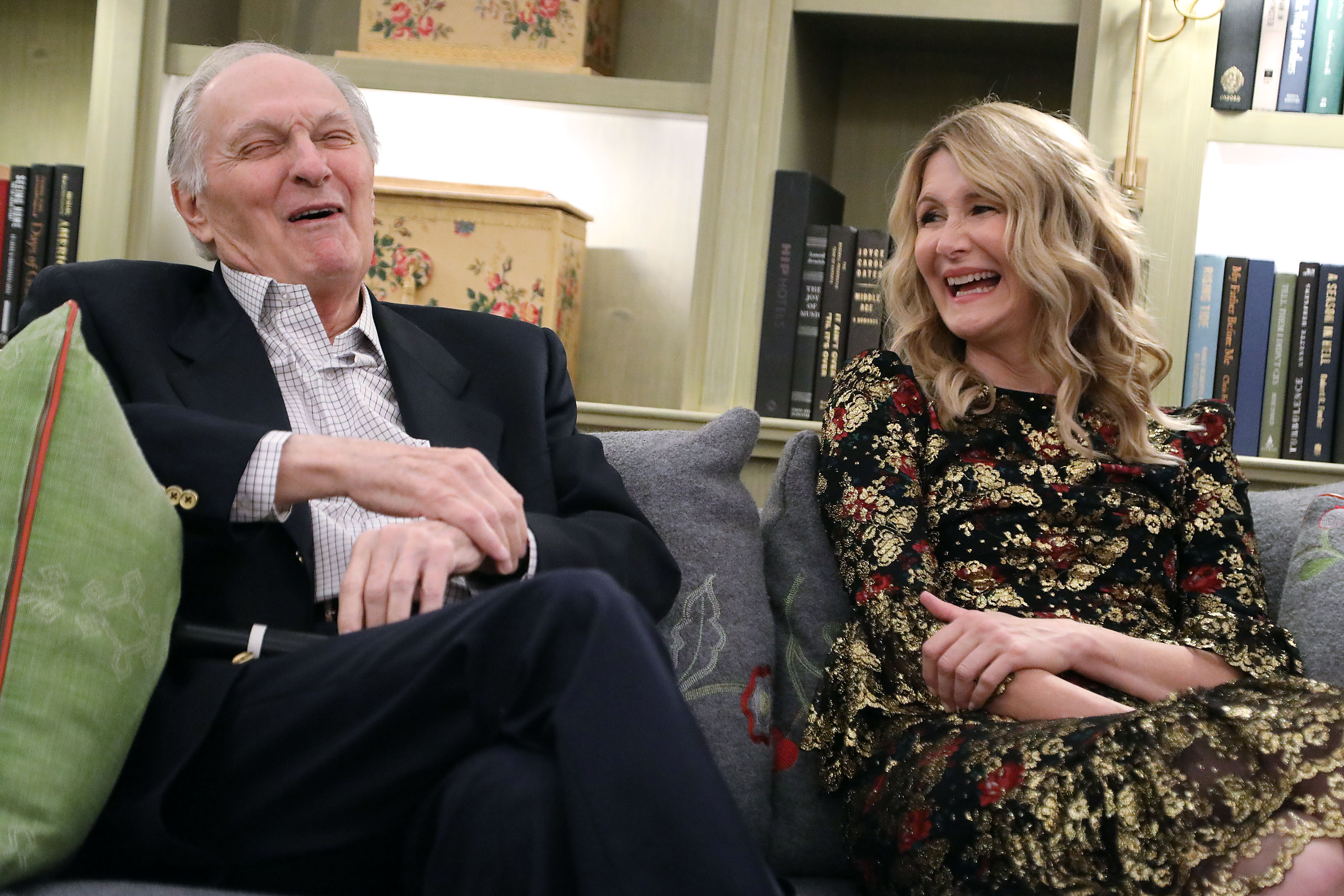 The lawyers are said to represent hope but what do they represent to us and to the story?

LAURA DERN: I think Noah did a lot of that thinking for us. As Adam spoke to it, we were given a flawless piece of art.  Truly every word and even description or guide in there for this lawyer, how she dresses, how she kicks her heels off and sort of scoops up next to her on this couch is in the script for me as this place to define this kind of attorney. And I think what’s amazing about the journey of being a reader of the script, just being a viewer of this story, is that for every single character, Noah’s laid out this narrative where you think you know them in one way.

I have theme music whenever I speak, so just so you know next time you ask a question, it will happen again. But I thought I knew her. And Noah gave me as an actor the opportunity to go that much deeper. We’ve all had our sides of knowing these lawyers, I felt that she was the hero and the muse of finding someone’s voice for them and allowing them to be heard and protected. He gave us the end scene opportunity where I was like oh my God, it’s all about her. And I had sort of forgotten that even as the actor and it’s just so gorgeous because he really summed up family law in a pretty remarkable way on this side of things.

ALAN ALDA: I kind of ignored that for the most part. My character, it seems to me, is an interesting example, of halfway between the rapacious lawyers and the people who want to be protected by ethical behaviour.  Not just ethical behaviour, but some sense of fairness. And the interesting thing, like Adam, I didn’t intellectualize the character, I didn’t analyze, I never do that. I try to find a way to convey who the person is that goes beyond what you can put into words. Right in the middle of shooting, I said to Noah, oh, I think I get who this guy is. He kind of laughed because we were halfway through.

But he has the best intentions, but his incompetence to match up against the rapacity of the really rough lawyers who will do anything. And I think the movie is a really good road map for people who are contemplating divorce because this is some of the worst you could come up against. And it’s out of your control. It’s tragic in that regard. The divorce industry, which I think is many billions of dollars big, is stacked against you if you enter into that arena. So, I found myself playing the guy halfway between the worst and the best with the best intentions. 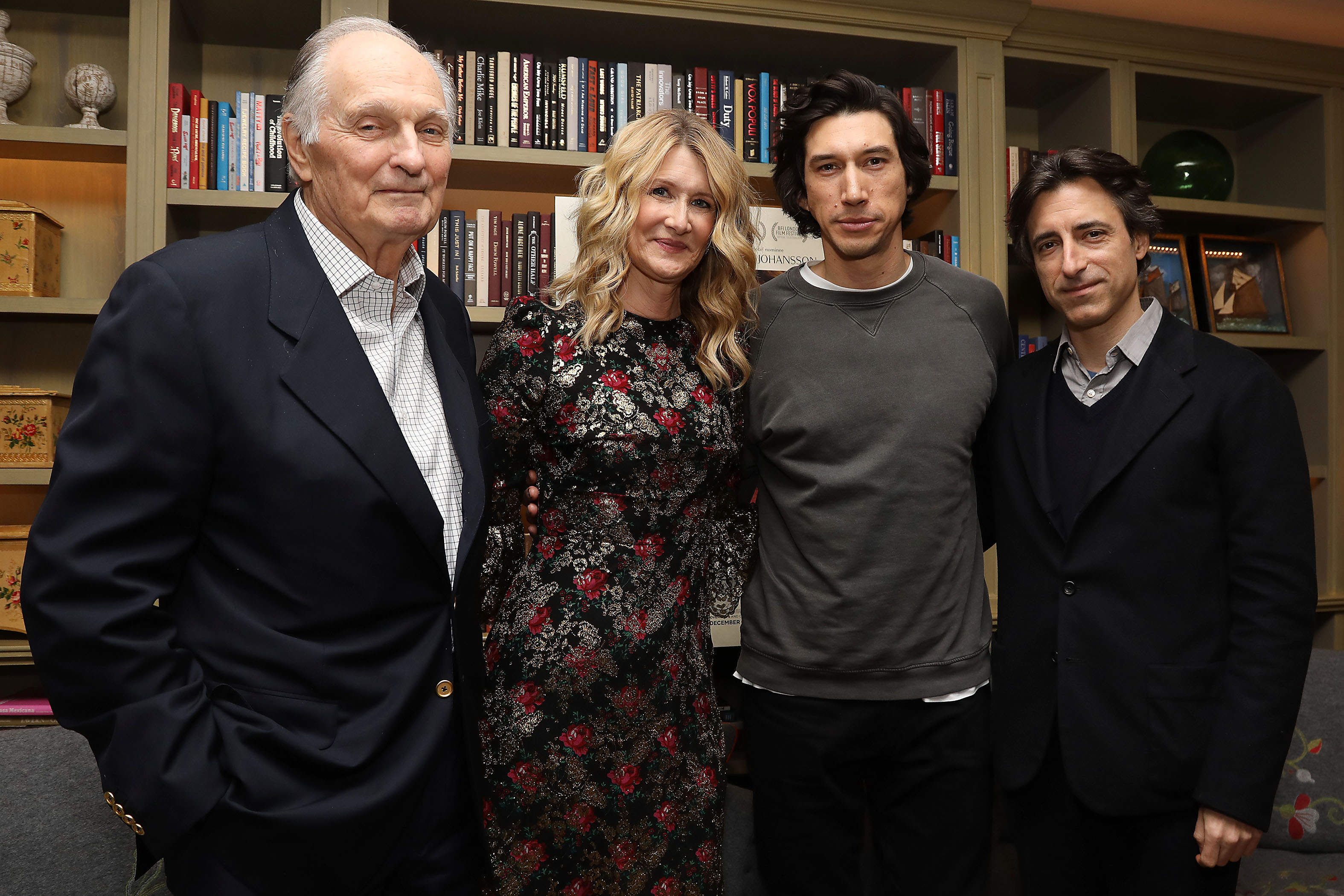 The central characters and actions were derived from real experiences, did you add shades?

ADAM DRIVER: There is ambiguity in it, which I think is a testament to the writing, that I feel like that’s truer to life. We don’t live in a genre. Things aren’t always centered around an obvious climactic thing. And with everything, you bring your personality to it or you try to make everything personal regardless of what it is. Aa a child of divorce, I don’t think that that necessarily has to be a pre-requisite to play that character, though. Because if anything, you could have been in love and still understand it. It’s not even really my job to have a feeling. It’s to convey a feeling or to tell the story and for the audience to have a feeling. So, I don’t remember specifically thinking about ambiguity. That’s a hard thing to play. But there are so many things in the script that –I know what it’s like to be rudderless, where suddenly you’re comfortable living one way with another person and his journey through the first half of the movie is playing catch up, where hers is the opposite. She seems to be building herself up. And you know someone on such a chemical level and suddenly all the molecules in your body have to change in how you relate to that person. And he doesn’t really have time to process grief in a way. Or not losing love, but love transitioning into something else.  And it’s only through performance does he finally get to process it. When he sings somebody else’s lyrics, does he actually get to –so it’s things like that. Noah has filled the script with a lot of things that are easy to make personal, even though they’re not always centred around the divorce if that makes sense.

What was the most physically demanding scene and why?

LAURA DERN: For me, it was oddly a very physical part. In our research and our wanderings, Noah and I, we met several people and women in this field.  And I was very struck by something that I hadn’t seen so specifically until then.  And I so hoped to have that show up in the character, which is a woman who is determined to make sure that women find their voice in a particularly male-driven mostly sexist previous past. And now this woman is sort of boss of the room, and yet uses her body to get the job done in a really odd and interesting way to me.  So, we have a lot of fun of sort of figuring out how that becomes yet another strategy in manipulating for the ultimate goal of women. It’s an interesting thing as a female to consider.

ALAN ALDA: The only physically demanding thing I had in the movie was hugging Adam. Because he’s so tall, I kept choking myself on his shoulder.

ADAM DRIVER: Hugging Alan is exhausting. Having this weight on me –it’s like this mosquito.