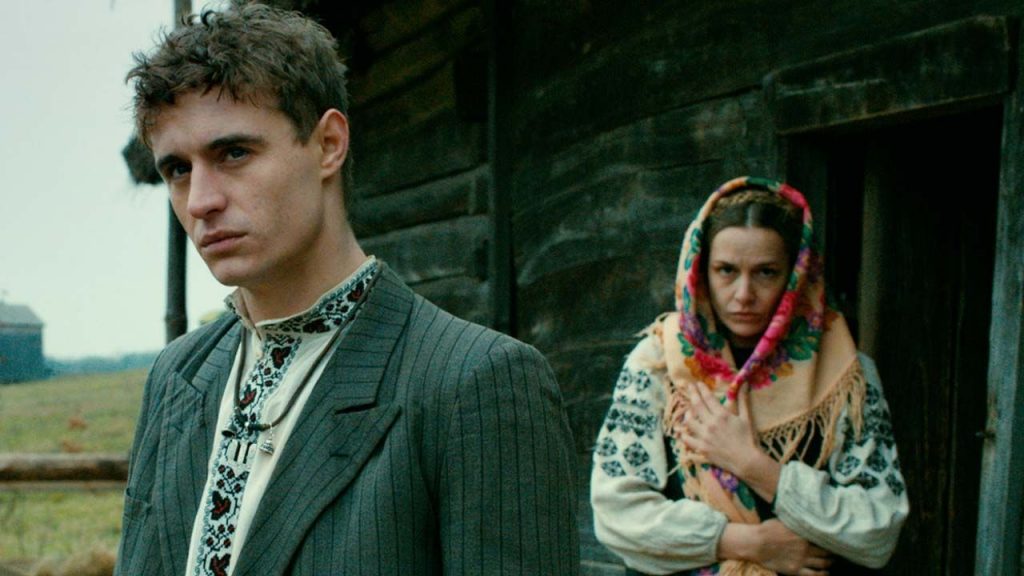 Holodomor, the intentional starvation of up at 7 million Ukrainians in 1932 and 1933 only came to light in 1991. Stalin manufactured a policy of famine in the country known as “Europe’s breadbasket” as a genocide so Russia could easily take over the resources rich country. Only when a western reporter dug into the mystery behind the mass deaths did the world community understand what happened. Holodomor sets the stage for Bitter Harvest, a fact-based historical drama starring Max Irons as Yuri and Samantha Barks as Natalka in in theatres this week. We spoke with the stars about this unimaginable chapter in modern history. 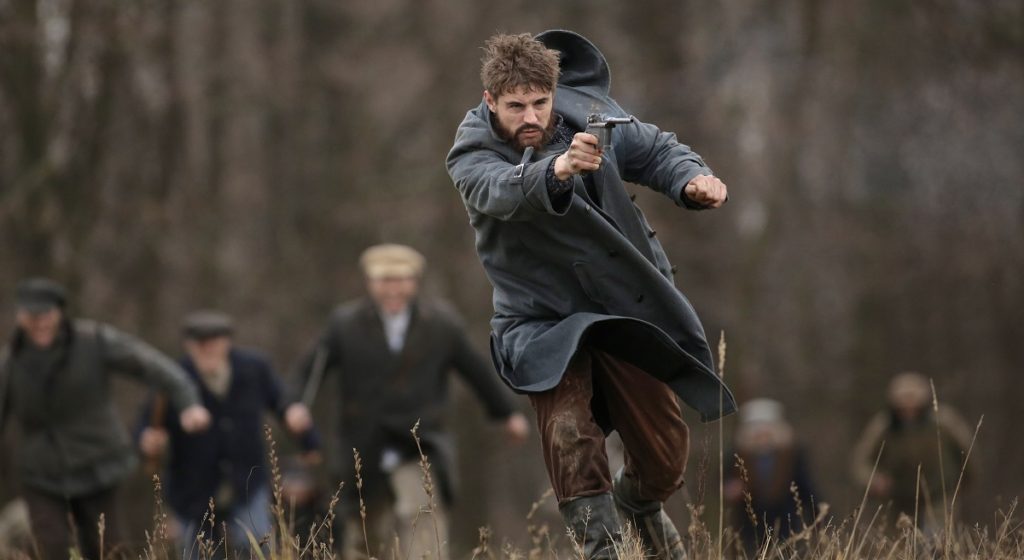 Max, Ukraine has a dark history, falling under one fascist regime to another.

That’s the thing that’s what drew me this project to begin with, the Iron Curtain and Stalin’s effort to keep what was happening under wraps. Only 24 countries experienced a manmade starvation.

This is an astonishing story of Stalin’s policy of mass starvation of Ukrainians that wasn’t revealed until recently. As Stalin says in the film “no one will know”.

Ukraine’s occupied history goes back hundreds of years; it has been stuck between a rock and a hard place. It’s a valuable country, known as Europe’s breadbasket, and it’s very profitable. It’s rich in oil and gas and iron and copper mines. It means a huge amount of money to Russia. Stalin tried to eradicate any Ukrainian identity. Putin’s invasion of Crimea showed his refusal to accept Ukraine’s right to exist on its own. It has been tortured.

Do you feel the weight of responsibility in telling the story?

You can’t worry about that during filming but yes it’s true, it did come to me, we were fortunate to shoot in Ukraine in historically accurate locations. We were often informed by owners that mass graves are on their properties and haven’t been touched. Also our crew was largely Ukrainian and we were able to talk to them about their parents or grandparents who experienced Holodomor.

Yuri endures hell for most of the film. How did you meet the challenge of playing that day after day?

You don’t want to look at the script and take in 110 pages and deal with that onset. You can deal with the microcosm your character is in but you have to sit back and remember that there are lots of jobs at work, the director, the director of photography, actors, set dressers and it all combines to tell the story.

I’m a cog in a machine. It’s funny when youre dealing with stuff like this, you don’t want to comment on how you feel about it. It’s unhelpful. It’s the musical equivalent of swelling orchestra telegraphing emotion.

This is a physical role with lots of horseback riding and fighting.

I didn’t do all the stunts. We had an incredible team of Cossack stuntmen and women; they can ride in a particular way. There’s a brief scene when a man is in full gallop and he climbs underneath his horse with particular precision. Cossacks lived in southern Russia and Ukraine and were noted for their military skills and their style of dress.

Did you research? Was there much material?

There isn’t much material because of Stalin’s conscious effort to stem information leaving Ukraine. Gareth Jones was a Welsh writer who managed to bring information the Western world the existence of this man-made Soviet famine of 1932 but he was accused of manipulating the truth to his own political agenda. Only in 1991 was the true nature of Holodomor revealed.

You come from an acting family with at least 10 well-known actors.* Is talent in the DNA or upbringing?

I always tend to turn away from DNA argument. I think nurture is a more interesting way of looking at things. There are more variables at play then a determination of DNA. When I was young I had the opportunity to see a lot of theatre which develops a part of your imagination and was exposed to many conversations about performances.

Does your father ever come on sets? Or does he advise you on performances?

I couldn’t imagine anything worse! It would be unbearable. Maybe that’s too harsh! 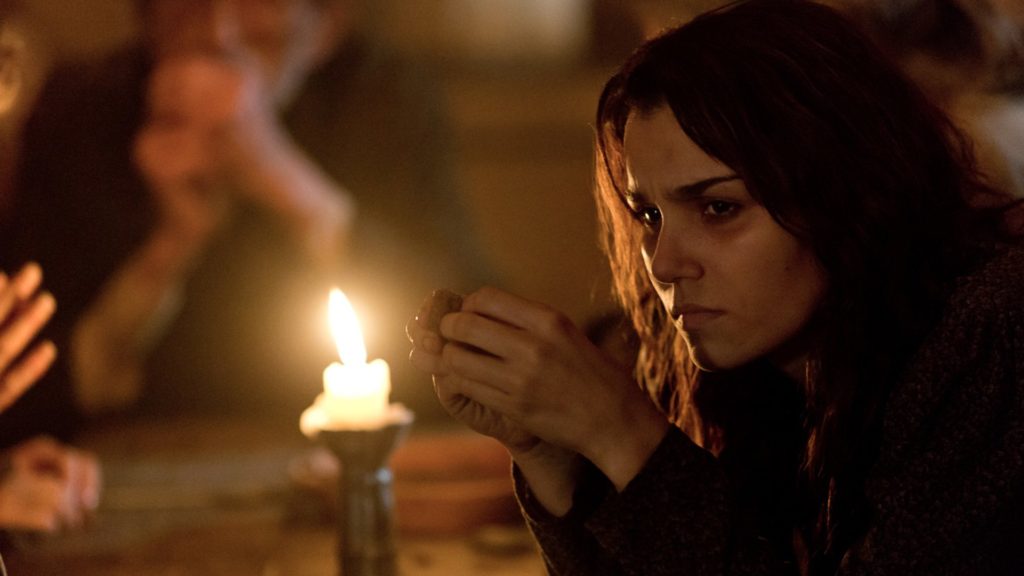 Bitter Harvest begins in an ideal peace time world of family and villagers and builds to this massive story of evil. I think it’s done in a lifelike and organic way as horror gradually dawns.

Yes when tragedy hits you don’t anticipate it and these people didn’t act on the events as a community. They knew the Nazis were coming but this they did not know. One day they were doing great and suddenly it came and tragedy struck. It was emotion and called on inner strength.

Your character Natalka was the picture of rural innocence, and we see where it all goes and how she is compromised. What a great acting experience.

It’s one of those arcs you dream of getting; that challenge and the fact that this really happened. There is a pressure to honour those who went through this and died. My character is based on true characters and what so many people went through and being torn apart.

To think this was the fate of millions of Ukrainians and no one in the world knew.

It was uncovered in the New York Times in 1992 which shocked the world. People thought it was a natural famine and that long for it to come out which is shocking and people don’t know the way they should have. I feel grateful to be part of this important story and film.

Natalka lost weight as she slowly starved – did you bulk up for the first chapters?

I lost weight throughout the movie playing the character. We shot in sequence mostly so timewise I was able to lose weight and look like a woman who was starving. If she had a crust of bread a day she was lucky.

The film was shot in the Ukraine – did that bring it home?

Yes. It was chilling being in the same locations where this happened. You’re in a scene where villagers had food taken from the while their workload was increased. The military vehicles arrived on the set and you could feel the threat. It brought a whole new level to the movie. You just feel it so heavily.

« Talk about drama! Heartbreak! Triumph! Redemption! Loss! and Fun! Oscar 89 Had It All
X-Men Lead the Week in Movies But There’s Gonna Be This Feud on TV »