Toronto’s resident fantasy maestro Guillermo Del Toro shot The Shape of Water here. Sally Hawkins nimbly plays a mute cleaning lady who craves love. It’s the Cold War and the government lab where she works has a secret kept under lock and key. A sentient sea creature / human of great beauty is being kept locked in a water tank. The two mute characters immediately understand one another and develop an emotional and ultimately sexual bond. He’s in danger of being destroyed by the agency so she kidnaps him and keeps him in her bathtub. Oscar winner Octavia Spencer is criminally underused as her fellow cleaning staff and translator, but helps her sort things out as they are now fugitives from the law. It’s stunningly beautiful, imaginative and emotionally gripping, a big experience that will wring you dry.

Gary Oldman’s tour de force performance as WWII era Winston Churchill is a miracle of art and talent in Joe Wright’s Darkest Hour. The actor we know is completely submerged and unrecognisable not merely via makeup, prosthetics and added pudge but more importantly, in spirit. He is an ageing, boozing warrior with the weight of the world on his shoulders. Oldman disappears into the soul of Churchillan wit and fire showing us the range of the man’s imagination and temperament. Britain is at a crossroads, weighing certain slaughter in entering into a war with Hitler versus trying to negotiate with the monster.  He’s haunted by the massive number of soldier deaths during the Gallipoli campaign which he oversaw, and becomes paralysed, and parliament rises up against him.  Oldman’s too good to be missed, and gives Daniel Day- in Phantom Thread his only real competition.

So Woody Allen is releasing his 48th film in the firestorm that is #MeToo and it will be interesting to see how badly it flops. Wonder Wheel stars Kate Winslet, Jim Belushi, Justin Timberlake and Juno Temple. It’s a rough, grim drama of a family living on Coney Island in the fifties and dealing with dashed hopes, mortal danger, crossed wires and sexual jealousy between mother and stepdaughter – does that remind you mother and stepdaughter Soon-Yi? An actress/waitress despairs of her life and the migraines she gets from the surrounding arcades, her unsuitable husband and her prodigal stepdaughter’s arrival home. Cue the mob, a handsome lifeguard, the FBI and William Shakespeare. I’ll warn you that it is unpleasant and crass to say the least. It has aspirations but the tone is bitter to the enth degree.

Black Mirror Season 4 has arrived on Netflix and continues its stellar tradition of superior filmmaking and spine-tingling and timely stories of tech’s impact on us. Jodie Foster directs Arkangel, one of the standalone entries, about a mother played by Rose Marie DeWitt who has her child chipped with a device to protect her from experiencing upset. Seems like a good idea. When she has to walk by a house with barking dog on her way to school, the device mutes and blurs the animal so she doesn’t notice it.  It also measures her vitals and maps her movements so her mother knows precisely what is happening to her at any given moment and that she will never be frightened. Ha. Children grow up and things change, the Arkangel app is pulled from the market on ethical grounds as mother ramps up her obsessive spying. It’s a cautionary tale perfect for the times as we understand the cost of surveillance and constant contact on human nature. Whoa!!

The Crown Season 2 is finally here on Netflix.  Queen Elizabeth II is played by Claire Foy who also played Anne Boleyn on Wolf Hall – she’s just that regal! However, British forces are fighting an illegal war in Egypt, and her third Prime Minister, Harold Macmillan is disgraced and removed from office.  Season two looks at the end of a traditional way of British life and the beginning the social revolution of the 60. Meanwhile at home, there’s Prince Phillip, played by Matt Smith, he of the wandering eyes and endless “publicity tours” that take him away from the Queen for months at a time and into the arms of international lovers.

One of Elizabeth’s greatest frustrations, according to the story is her inability to influence politics and government, especially given her years of experience and knowledge. It’s a tough yet tender portrait of the most famous woman in the world who has had a life lived under scrutiny and knows nothing else.  It’s based on the award-winning play, “The Audience,” and the series is nominated for 10 Emmy Awards. We meet Princess Margaret’s illicit lover Tony Snowden . . .

Murdoch Mysteries fans and I know you are legion, hear this! Shaftesbury, CBC, and Cineplex Events have set free screenings of Murdoch Mysteries’ third annual holiday special, “Home for the Holidays” today across Canada. The screenings will feature additional behind-the-scenes footage with cast. If you can’t make it to the theatre, CBC’s airing is on Monday December 18. And tp- further sweeten the treat, CBC will run a MM marathon of all three holiday specials back-to-back with “A Merry Murdoch Christmas” at 2, “Once Upon a Murdoch Christmas” at 4, and a re-broadcast of “Home for the Holidays” at 6. Upcoming Showings.

“Home for the Holidays” Sneak Peek

Murdoch and Ogden’s Christmas in Victoria is disrupted when he and his brother investigate an archaeologist’s murder.Don’t miss the Murdoch Mysteries holiday special “Home for the Holidays” Monday at 8pm on CBC

TIFF Bell Lightbox is offering a retrospective on the films of Sofia Coppola from now until December 17. Her latest film The Beguiled won an award at Cannes this year – it’s one of my favourites of 2017. She is the daughter of Frances Coppola, and has his eye for cinema, Her films concern young women, empowerment and strength of character. A friend calls her films a “palate cleanser” in these times. How true. Come to Lightbox for big screen showings of The Virgin Suicides, Marie Antoinette,   Somewhere, Lost in Translation, The Bling Ring and my personal favourite The Beguiled.

One Day at a Time Complete Box Set is finally available 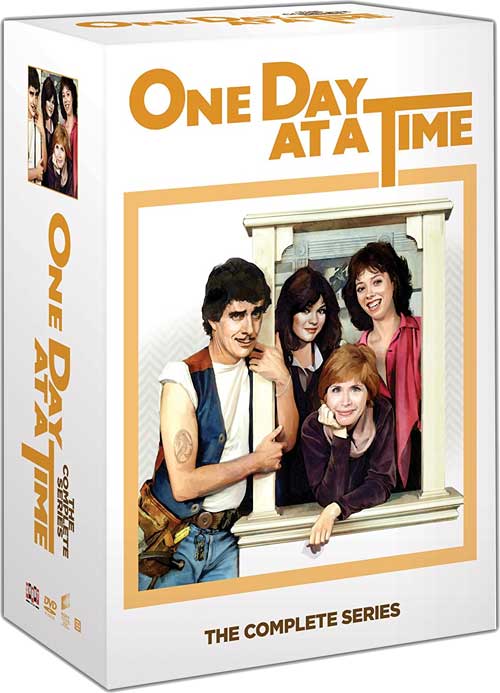 from ShoutFactory.com and Amazon. I don’t know about you, but the sitcom about a working class single mother and her two chalk-and-cheese daughters spoke to me as a young person. I saw women working things out, aspiring to be more and pulling each other through thick and thin, by themselves with the occasional help of the apartment building superintendent played by Pat Harrington.Bonnie Franklin plays the optimistic single mom, Mackenzie Phillips is her eldest rebellious child and Valerie Bertinelli is the youngest. Each is a handful with their mother’s strength, commitment to one another and to living a good life.