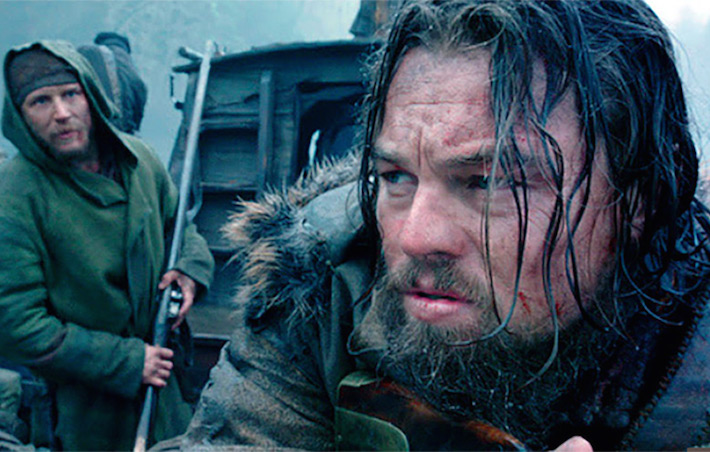 A difficult film to watch given body count and extreme events, the hateful Hateful Eight notwithstanding, The Revenant leaves us in no doubt that we are but specks of grain in the scheme of things. It’s the true story of a man left for dead following a bear attack which reminds us in no uncertain terms that Mother Nature is a psychopath.

It’s deep, frigid frontier winter (in Alberta, Canada) in 1820 as a troupe of weather beaten fur traders and military men move through the forests and wide rushing rivers of the foothills fighting natives and exposure. Big name stars are nearly unrecognisable because the extremes their characters have endured have bloodied and bent them.

Stunning visual details reveal the depths of their privations, the bodies they stumble across, sudden deaths as silent arrows from nowhere split skulls, sudden blizzards bearing down, the acid sting of the cold air and water. They’re wrapped in rags and skins and eat what they can find. There is no relief from hardship.  Nothing needs to be said to know death looms.

DiCaprio’s character Hugh Glass, on whose memoirs the film is based, is traveling with his son. He gets between a bear cub and its mother and is attacked in a convincing, agonising and seemingly endless episode.

His fellow travellers care for him for a while but eventually leave him for dead and murder his son. But by some miracle of human will, he gets up and walks to fight again.  He embarks on a mission of vengeance that will take years.  He is haunted by the ghost of his wife and it gives him reason to live.

A revenant is “a person who returns or a ghost”.  Revenants are in every frame of the film in man and nature. The film is nothing but ghosts. That’s part of its profound effect.

Ghosts haunt the unlucky band that dared to make the journeys they did.  The ghosts of their lost and dead, their lives before, and the certainty of their own death.

The ghost of the bear, nature’s fury, puts into motion years of desperate, bloody human acts. The fatalistic nature of the film seems appropriate for a time when people had so little sustenance but iron wills and little governance.

I’ll bet Leonardo DiCaprio is still haunted by the magnitude of difficulty he endured to make the film.  It’s him in the frozen lakes, inside what I think is a real carcass, and between the bear’s jaws as he’s tossed and broken.

Iñárritu worked only in daylight hours for natural light, with a few sunset and dark scenes.  It limited the shooting schedule during short winter days, so the company worked hard in long takes with real weather nipping at them.  It looks great but I feel for the actors who are probably still shuddering.

No amount of human activity or thought can overshadow the naked truth that nature cares little for us.  There is no other explanation for the list of natural horrors that befall Glass and the traders.

Nature is also beautiful.  Intensely uplifting moments occur when Glass witnesses glorious wonders, three moose crossing a river just behind him, an avalanche on a faraway mountainside, a flight of birds, a herd of bison thundering by and a comet hurtling to earth.  These are stunning moments that remind us that life has meaning beyond man’s limited reach.