Maudie (Dir. Aisling Walsh) Nova Scotia primitive artists Maud Lewis’ was born “crooked” and in some ways it shaped her destiny. She was treated like an outcast in her small village and a slave by her aunt who kept her against her will, but didn’t want her.  Maud was fiercely independent and had a lot of smarts and common sense, so when her aunt threw her out for tarnishing the family name by going to a club, she applied for a job as housekeeper for the local fish peddler. Ethan Hawke gives the performance of his career as Everett Lewis, an anti-social, taciturn, orphaned old man who still takes his meals at the institution. Maud made a bold decision to marry him and suffered his temper and beatings. He makes her walk everywhere despite her worsening condition. He sees something in her and little by little they fall into something like love. It’s not easy living in an uninsulated 12 by 12 shack but Maud never lets it get her down. And she discovers Everett’s cache of house paint. She discovers that house paint makes a good tool her for imagination. She starts painting primitive images on their walls and windows. They are charming, simple and childlike and reflect her day to day existence; there is Everett driving the horse cart, the cat and dog, birds, cows in the farm fields in all seasons. A New York fancy gal summers nearby and “discovers” Maud’s work and pays her for commissions.  Word gets around and soon people are coming to the house and buying it, Everett pocketing all the money of course.  Maud became known internationally but it didn’t change her much. Sally Hawkins as the strong minded Maud reshapes herself physically as the disease takes her over, and is utterly amazing.  The best part is the “love” story – as hard bitten and taciturn as it is.

Christine (Dir. Alex Campos) Rebecca Hall, the English actress plays Christine Chubbuck, the Sarasota Florida TV newswoman who fatally shot herself in the head on air in 1976. It was rebellion; it was her mental state and disease that is only referred to as “what happened in Boston” by her mother. Yes it sounds like something we don’t want to see, but Hall’s performance is frighteningly good, like reading Dante’s Inferno or looking at Brueghel’s’ paintings of the Circles of Hell. It’s so real and gets under your skin so that you can’t look away.  It’s extraordinarily downbeat but beautifully made and completely captivating. The shooting itself is not exploited; it’s just the end game of her long breakdown coming from mental illness, yet another doomed “romance” with the station anchor, she died a virgin, her negative reaction when her mother got a boyfriend and her ongoing battles for airtime with the boss.  She wanted to cover important issues but wound up doing stories like The Chicken Lady. The one issue story she did, she messed up so enormously it seemed like a bad joke.  Hall draws you in so far, with a performance that is riveting and real and masterful.  She should be nominated, but considering the subject matter and that it was a news “woman” I don’t think it’ll happen.

Birth of a Nation (Dir. Nate Parker This is the one they’re all talking about and I was able to attend an international news with all the stars. Parker has revived the little known true story of a slave uprising in 1831. Nat Turner led the revolt that lasted two days slaughtering white slave owners and sympathisers. The film is well made, made with passion and fury, well executed and features great performances across the board. It is an important movie and the time is right melding with #BlackLivesMatter . Nate Parker, the alleged college rapist who made and stars in the film neatly deflected three questions about the incident, saying he didn’t want to talk about it and hi-jack the table from the others who all worked so hard on the film.  The female stars, Aunjanue Ellis, Gabrielle Union and Aja Naomi King read written statements on the reality of racism, the problems facing women, the disabled, the disenfranchised and the forgotten. It was stirring and a smart move. Penelope Ann Miller and Armie Hammer sang Parker’s praises and the teamwork mentality on the set. The movie is pretty good but it was completely overshadowed by current politics and news. The news conference was intense, strident and kind of outrageous. And I’ll never forget it.

Manchester By the Sea (Dir. Kenneth Lonergan) This is a killer. A ne’er-do-well in Boston (Casey Affleck in his best work to date) gets a call that his brother has died up the coast and that he must take in his teenaged son.  He lost his children with ex-wife (Michelle Williams in another Oscar worthy performance) in a house fire for which he was responsible.  She remarries but their love is still present. It’s a family history in a powerful yet intimate film lightened with moments of humour. A lot is flashback so we get to know his late brother and nephew as a child and how they all loved each other and interacted so well. Scenes on the brother’s fishing boat are so joyful, before all of Affleck’s losses. Affleck’s character is unable to be with anyone and initially refuses to take in his nephew. He does and they are soon at war. It sounds like a rough slog but it’s not – it’s a bittersweet loaded with love and it’s a fun cry.  Hello Oscar!

Chloë Grace Moretz stars as Susannah Cahalan in a film based on Cahalan’s book about her devastating experience with a wrongfully diagnosed disease. She was a smart, active junior reporter at the New York who was going through a bad patch. She imagined bedbugs were getting into her skin and she was hearing voices. Her behaviour deteriorated into violent, irrational and paranoid states followed by grand mal seizures and she stopped functioning. Doctors assumed something had sparked a psychiatric disorder like drinking, drugs, not enough sleep, despite the reality that Susannah was a model citizen, ambitious and disciplined.  Extensive tests revealed nothing was wrong but before long she sank into a frozen, catatonic state.  The doctors admitted they didn’t know what was wrong and suggested she be committed.  Her terrified parents fought for a better outcome and eventually found a doctor who made a breakthrough. No spoilers here but suffice to say Moretz is a capable actress and does justice to a difficult part.  It’s painfully heartbreaking to watch this promising young woman melt the way Cahalan did, but the film is uplifting, rewarding and provides information about a little known auto-immune disease that can be cured. Here’s a clip with Susannah Cahalan.

Norman: The Moderate Rise and Tragic Fall of a New York Fixer (Dir. Joseph Cedar) This is Richard Gere playing a ridiculous character (with pointy ears and collapsed hair) an elderly “businessman” who gambles away his dignity by “fixing” things – promising to arrange for his targets to get better tables in restaurants, juicy stock tips, to meet that person they want to meet, or to invest money. Trouble is he can’t do any of the things he offers.  He’s a unconscionable liar. He’s been mildly successful over the years as a fixer, and goes miles out of his way to lure in the next sucker but it usually ends in regret. He plots to meet an Israeli politician (Lior Ashkenazi) and tries to take him to a dinner party that night at the home of an influential local. Norman goes so far as to buys the man a pair of shoes. He buys a politician a pair of shoes valued at $2,500. That’s $2,500 he doesn’t have. The man thanks him and gives him his card. Then it’s back to reality for Norman.  He’s a pariah, no one wants him, people cross the street to avoid him and he’s a big nobody. His one fan is the local rabbi (played unconvincingly by Steve Buscemi) who believes his bluster and asks him to raise money to save the synagogue.  It’s hard to appreciate a film with a central character for whom you have little respect and who is only too willing to lie and make a buffoon of himself to entertain and trap others.  It’s a big problem. 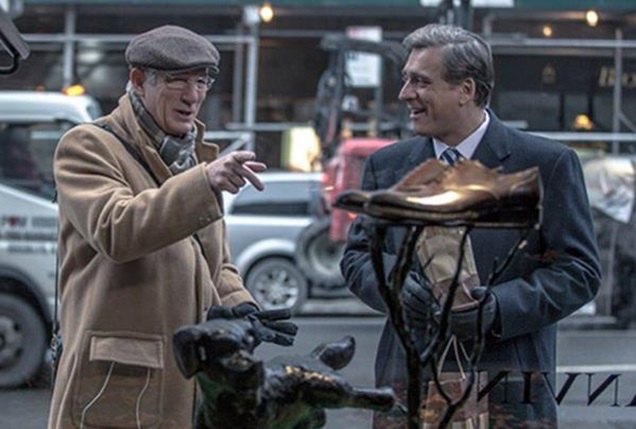