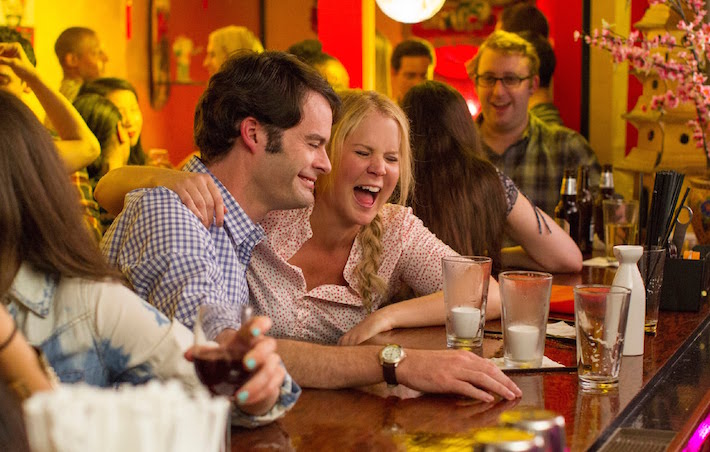 Amu Schumer, reportedly the latest second coming in female comic, hits so many buttons in Trainwreck your head will spin. That’s the intention, of course, rolling, shock-based laughter via equal opportunity disses, putdowns, tantrums, misunderstandings, missteps and misreads.  Laughing at one flawed but ultra-confident human being trying to make it in the big city.

Amy’s character, Amy, a casual sex enthusiast and magazine writer, is fairly hard to like but that’s not what Schumer’s modus operandi.  She wants to kick us out of complacency with her arsenal of outrageous zingers, behaviours and impulse control issues. You have our attention!   It’s a good frosh try but there isn’t much new. There are plenty of laughs to be had but the film is so thin that it evaporates immediately upon exiting the theatre.

Trainwreck is in the sweet romcom spot – totally accessible, easy, not too deep, clever, naughty and funny with just enough, but not too much drama to be legit.  But there’s a sour taste as she challenges us to empathise even more challenging than, say a Katherine Heigl outing.

Movie Amy’s having a great time enjoying noncommittal sex on her terms and thinking only of her own immediate interests. Most telling are the sex scenes which while often funny, highlight her shortcomings.

Surprising subplots, as with Last F**kable Day, that ponder the problems of women two or three decades older than she is, like wrestling feeling “old” against Hollywood’s treatment of actresses over 30, an ageing and deteriorating movie father – the one who stamps her with his motto “Monogamy isn’t realistic” –  and suddenly being the parent/ confidante.

and especially difficult for her is nailing down what she wants in life, to continue meaningless encounters or to move on to something else. Family ties are tested on the topic of what to do with dad, and on the sly, what to do about Amy.  Because this is about arrested development and isn’t it fun?

By the way dad’s monogamy message only imprinted on Amy, not on her sister Kim (Brie Larson).  Kim is a non-ironically happy suburban wife and mother, which raises Amy’s hackles. It’s not hers so it’s wrong.  She is trapped behind an all-consuming dogma guaranteed to keep her emotionally unavailable.  Here she is 34, doing whatever she pleases and complaining about how hard it to be a woman.

Schumer the writer is not kind to other women in her script, especially her editor Dianna – Tilda Swinton having a riot playing a queen bitch Anna Wintour type with absolutely no chance at redemption.

And the cheerleaders! She objects to their sexuality, that they are merely objects who “gyrate” when soon enough she’s leading a spirited cheer.  She breaks out of her box to prove a point about her ability to change,  for a man.

Amy’s diverse male lovers are pretty thoroughly objectified for laughs except for Bill Hader, her “real deal”. He’s just too good, kind, thoughtful, smart, patient and a doctor to be true.  He’s the storybook Future Husband and the only character not played as ridiculous, for laughs.

Amy takes a stereotypically male stance in her frequent casual hook-ups, using and discarding sex partners like so much Kleenex. She won’t stay over because she doesn’t like to feel breath or someone else’ skin while she’s trying to sleep.  So she says.

In other words, if he obeys her commands, gives in to her, she’ll stay.  That’s training someone.  She’s a strategic and manipulative thinker when it comes to making sure she’s orgasmed up to date.

Even as Amy is not especially likeable, she is relatable, and in that crosses the demographic lines.  Schumer’s humor is your basic jolts-per-second type, fired by shock value, quick and over and mostly wit-free.  It’s nothing new and there is a huge dose of it here.  Trainwreck is funny sure, but it isn’t that funny. Thank goodness for dramatic relief because without it, there is only mean-minded barbs.  Judd Apatow made this movie way too long even for Schumer’s mixed bag of laffs.

Big thumbs up to the supporting cast – Swinton who steals the film with a handful of unforgettable bits, LeBron James as himself, but a goofy, Downton Abbey-loving, interfering, tightwad who lectures Hader on his lifestyle.

Ezra Miller, Matthew Broderick, Amar’e Stoudemire and other diverse figures support Schumer. A black and white movie-within-a-movie The Dogwatcher starring cougar Marisa Tomei, and a randy Daniel Radcliffe and a bunch of dogs is hysterical.

« Get Out While It’s Hot:  Tropical Travel In The Summer by Kathy Buckworth
Free Movie Passes to see “Irrational Man” good for all Cineplex Theatre across Canada »